They first found a witch's lair thanks to a broken trail of breadcrumbs; now, after years of training, they're finding witches' heads with arrows. The sweet and innocent siblings Hansel and Gretel are all grown up in the first pulpy trailer for Hansel and Gretel: Witch Hunters. Second, director Barry Levinson, the auteur behind classics Good Morning, and Rain Man, embarks on an interesting detour with the found footage outbreak film The Bay.

Next, prior to Sam Raimi’s Oz: The Great and Powerful hitting theaters next year, we’ll be treated to a musical animated feature starring the likes of Kelsey Grammer, James Belushi and Glee’s Lea Michele in Dorothy of Oz. Last off is the first trailer for the inexplicable sequel to the panned flop Atlas Shrugged Part I from last year with the aptly named Atlas Shrugged Part II. They should team with the Wachowskis and make “Cloud Atlas Shrugged.” But I digress, this isn’t a movie studio board meeting – this is Trailer Tracker. 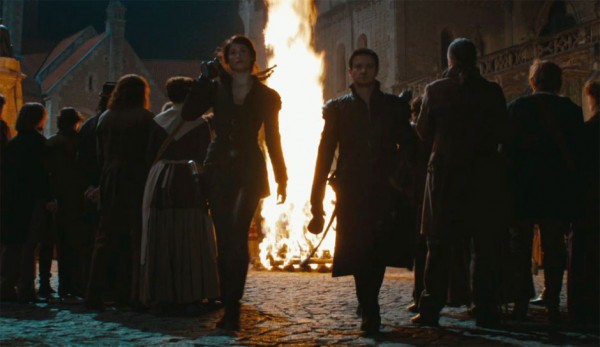 Steampunk meets Spaghetti Western with a twist of Grimm in Hansel and Gretel: Witch Hunters, the second “hunter” revision of the past year after Honest Abe took an axe to some pesky vampires. Rising stars Jeremy Renner and Gemma Arterton star as the grown-up brother and sister pair who now act as witch-slayers for hire following their narrow escape as children. From director Tommy Wirkola (the man behind Nazi zombie horror-comedy Dead Snow) “H&G” promises to be among the purest instances of camp to hit theaters in wide release in some time and really seems to be more of a fan-made YouTube video than an effort MGM and Paramount would back.

It’s even more jarring to see Jeremy Renner is such kitschy fare after giving significantly more mature performances in The Hurt Locker, The Town and The Bourne Legacy. I mean, Hawkeye had a bow and arrow in The Avengers, but even his futuristic instrument wasn’t rapid fire. Even more so than Abraham Lincoln: Vampire Hunter, it seems rather unavoidable that this will be anything but laughable dreck especially when we seem to continually have filmmakers take their silly projects far too seriously. Hopefully the strong cast, which also includes Famke Janssen and Peter Stormare, can do something to save face.

Found footage takes the Contagion approach in The Bay, the first horror effort from director Barry Levinson and his first film since the Golden Globe-winning Jack Kevorkian drama You Don’t Know Jack with Al Pacino. Quite honestly, in spite of Levinson being unable to avoid some clichéd zombie movie tropes (even when trying to be a more grounded outbreak procedural), the trailer is pretty darn creepy and immediately hits closer to home than something featuring resurrected undead with half their skulls missing.

The title refers to the Chesapeake Bay (specifically the portions in Maryland) and the small town where the ecological disaster occurs. It’s unclear exactly what forces are at play, but they involved both toxic water and carnivorous parasites that eventually go all “chestburster” on you. The found-footage genre is getting more and more dry, with ghosts and ghoulies all but having used up their potency.  I somewhat admire that we’re going to new directions with the format, but I simply hope that the new set of clichés that accompany the shaky-cam approach don’t carry over to other settings and situations.

We return to the yellow brick road once again in Dorothy of Oz, the animated feature from independent studio Prana Studios (Hoodwinked!) and based on the book of the same name, which is an alternate Oz entry written by author L. Frank Baum's great grandson. So far there isn’t much to get excited about with Dorothy of Oz from its run-of-the-mill animation to essential retread of the story (which this time finds our young heroine thrust back to the mythical realm after she finds Kansas decimated by the tornado that transported her originally). This seems strictly for the little kiddies who like bright colors, chipper songs and a simple fantasy tale.

Ayn Rand’s 1,168 page magnum opus Atlas Shrugged had its first third adapted in 2011, but it failed to connect with audiences or critics who found it to be cheap looking, poorly acted and overall dull due to the lack of an arc (inherent with many instances of splitting a story). Even though the planned sequels were scrapped, the producers went ahead and raised the funds themselves. This trailer is certainly heavier on the action and sci-fi elements of the novel than the first as well as boasting (slightly) higher starpower including Samantha Mathis, Ray Wise and Diedrich Bader (if you don’t know the names you will their faces). Even with a slight upgrade across the board, it seems unlikely “Part II” will rise above its limp predecessor.