Trailer Tracker: Killing Them Softly, Trouble with the Curve and More

We’ve got some great trailers for smaller films this week on Trailer Tracker – but small doesn’t always mean boring, you know, so don't go anywhere.

First off is the slick first look at Killing Them Softly starring Brad Pitt from the director of The Assassination of Jesse James. Pitt stars as a hitman tasked with taking down two robbers of a mob-run gambling racket. Next, Clint Eastwood heads back in front of the camera opposite Amy Adams in Trouble with the Curve, a father-daughter tale about an aging baseball scout who goes on one last mission.

Next, is the twisted southern legal thriller The Paperboy from Lee Daniels, the director of Precious  starring Zac Efron, Nicole Kidman and Mathew McConaughey (among others). Finally, How I Met Your Mother’s Josh Radnor is back with his sophomore directing effort alongside Elizabeth Olsen in Liberal Arts, which finds a 30-something, who after returning to his alma mater, begins a relationship with a student. See, pretty promising right? That's Trailer Tracker. 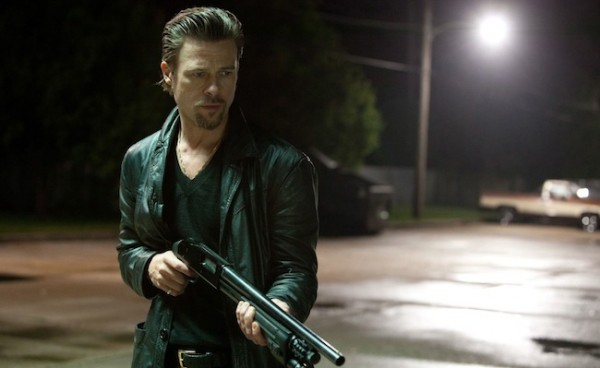 Brad Pitt looks for his second consecutive Oscar nomination for Killing Them Softly, a dramatic thriller that garnered some rave reviews following its debut at Cannes earlier this year. Formerly titled Cogan’s Trade, this will be Pitt’s second teaming with director Andrew Dominik after the sprawling Western epic that was The Assassination of Jesse James in 2007. Also starring Ray Liotta, James Gandolfini and Richard Jenkins, Killing Them Softly finds Pitt’s Jackie Cogan investigating a poker game heist as a point man, an early scout for an eventual hit.

If the trailer is at all representative of the final product, Killing Them Softly promises three things: crisp dialogue, a douse of ironic humor and sharp-looking slow motion (oh and I’m sure a great performance from our leading man). One could certainly draw comparisons between this film and last year’s Drive with Ryan Gosling as it certainly doesn’t seem like your typical mob-centric action flick. That, folks, is a very good thing in my opinion. Killing Them Softly will be released on Oct. 19, likely in a platform debut.


Trouble with the Curve

Clint Eastwood wants you to get on his lawn this time – his baseball field that is. In Trouble with the Curve, Eastwood’s ailing baseball scout takes his daughter (Amy Adams) on one last recruiting mission in an attempt to reconcile their relationship. Justin Timberlake also stars as Adams' love interest along with John Goodman, Mathew Lillard and Robert Patrick. It’s pretty clear from the trailer that Eastwood is doing his usual ornery, gruff old man thing (i.e. being himself), but frankly I’m all for seeing the legend on screen as much as possible (no matter the uniqueness of the character) before we lose the 82-year-old to retirement or otherwise.

Interestingly it will not be Eastwood directing “Curve” (nor did he script it), but rather his frequent second-unit director Robert Lorenz. I certainly don’t blame the guy as acting and directing in your own movie is an arduous enough task, let alone when you’re pushing a century. I’m interested in seeing if this baseball dramedy will be more than your average “one last” movie, as well what should be a solid dynamic between Eastwood and Adams. Trouble with the Curve lands in theaters Sep. 21.

Also boasting a debut at , The Paperboy scored decidedly mixed reviews, with some critics being put off by some of the subject matter and the general messiness of the entire film, with others finding it to be a wholly unique offering. Director Lee Daniels currently has two Oscar nominations to his name for directing and producing Precious in 2010, though it seems like this particular effort may not be as Academy friendly.

The Paperboy finds a man (John Cusack) convicted of killing a seedy sheriff who is given a new life when his female pen pal (Nicole Kidman) enlists the aid of two journalist brothers (Mathew McConaughey and Zac Efron) to try and get him exonerated. The trailer certainly is a lurid and grimy bit of promotional work, but all of the mixed word and controversy behind this one actually has me more intrigued. Look for this one in limited release Oct. 5.

Following up his directorial debut HappyThankYouMorePlease in 2011, Josh Radnor of TV's How I Met Your Mother fame returns to the big screen in Liberal Arts, a college dramedy costarring Elizabeth Olsen and Richard Jenkins about the complicated relationship between a 35-year-old (Radnor) and a female student (Olsen), 19. This is tricky subject matter to be sure, as coming off as sincere but not creepy in a situation like this is a difficult path to navigate. So far, since its debut at Sundance, Liberal Arts has scored some positive if not unanimously glowing reviews with high praise going to its leads. Hopefully this doesn’t descend into some overly quirky mumblecore mess and simply lets the talent on hand bring the charm.