The not-so-scary team of Mike and Sully are back in the trailers for Pixar’s first prequel , which will explore their relationship before they were really friends at all.

And then begins the end of an era. Depending on where you stand with the “Twilight” franchise that is either cause for sparkly tears or infinite fist pumps. Regardless, we have the first full trailer for The Twilight Saga: Breaking Dawn Part 2 in all of its campy, love triangle glory.

However, if you’re looking For a Good Time, Call…Seth Rogen, Justin Long, Ari Graynor and Lauren Miller, who can all be seen in the new red-band trailer for the upcoming comedy about two women who start up a phone sex operation.

For those who prefer boos over boobs, trailers also broke for two upcoming fright flicks. First is Sinister, starring Ethan Hawke from the studio that brought us 2010’s sleeper Insidious. Finally, if you enjoy the found-footage phenomenon the first trailer for V/H/S debuted, which brings us a horror anthology of shaky-cam fare. But don’t hit eject just yet – it’s Trailer Tracker. 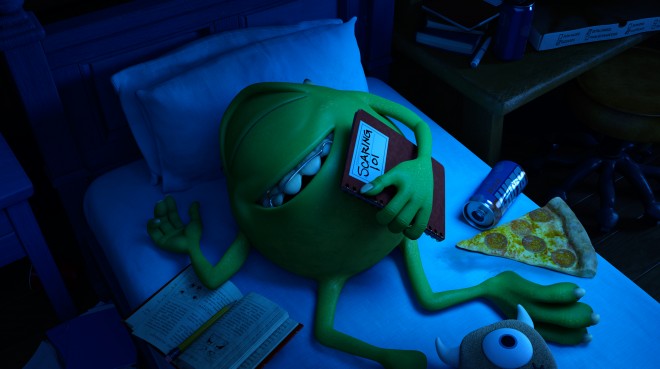 Trailers have evolved a great deal from when they were simply a rigid description of the upcoming attraction. Today we have teasers, red-band trailers, trailers for trailers and now for Monsters University we’ve gotten four, simultaneously released teases all portraying a slightly different setup to some dorm-room antics involving the hairy blue Sully and the one-eyed Mike. Set for a June 21, 2013 release, Pixar is already hard at work reminding us how much we loved these characters when they first appeared on screen all the way back in 2001. Check out the quartet of clips below.

I won’t spend a great deal of time analyzing this trailer, as the one thing of which I can be absolutely certain is that the quality of this clip is in no way going to sway your opinion. You — as a fan — are going to see it regardless or you — as a detractor — will avoid it like the plague. Here, the scope is grander, the special effects more polished and the stakes higher. If there is any time for this franchise to step up and deliver something that doesn’t deserve an upwelling of hate, here it is.

…1-877-MMM-HMMM. Oh yea. Torontonian filmmaker Jamie Travis has been on the indie circuit for some time now, with a number of his previous efforts having debuted at TIFF. Now he brings us For a Good Time, Call… A Bridesmaids-esque raunch-a-thon, this saucy effort finds two roommates who opt to create a phone sex operation to score some easy cash. Ari Graynor (Nick and Nora’s Infinite Playlist, The Sitter) and Lauren Miller (Superbad, 50/50) star as said naughty tongues with Seth Rogen and Justin Long jumping on in supporting roles.

FAGTC debuted at Sundance to considerable acclaim and is set for a debut sometime this year courtesy of Focus Features who picked up distribution rights. With this red-band trailer, I can certainly say this looks like a comedy I could — er — get behind. We haven’t seen these two lovely ladies in much before so this will certainly be a test of their lead potential. It’s unlikely this will get a very wide release, but for those who normally avoid independent features, this may be one you should actually keep an eye out for.

Although at a root level it shares much in common with Insidious (title meaning, the inclusion of demons, a “haunted” house, etc.), Sinister nevertheless still looks like an exceedingly creepy little flick. Ethan Hawke stars as a father who unwittingly unleashes the demon Bagul who lives through pictures and film and hunts the souls of children. The film first debuted as SXSW and so far is 100 percent “fresh” on Rotten Tomatoes with 10 reviews already in (that’s pretty good for a horror movie). Scott Derrickson (The Exorcism of Emily Rose) directs the supernatural thriller, and as far as horror movies go, this truly looks like one to see in a pitch-black theater.

Do you remember the dread? The dread when you realize your VHS tape was stuck in your VCR! Ahhh! Kidding aside, V/H/S does bring us a horror movie format that we don’t see much of anymore: the anthology. Hired by a mysterious third party, a group of friends is tasked to retrieve a tape from a desolate home. Upon arrival, they discover hundreds of tapes and in searching for the correct entry set their eyes upon unexpected horrors. Like Sinister, this low-budget offering has been making its festival rounds and has also garnered some good will from patrons. The word is that while V/H/S/ has some uneven segments, that all-in-all manages to reinvigorate the found footage template.