The duel of the “White House siege” movies has officially begun, as the trailer for the Gerard Butler and Aaron Eckhart-led Olympus Has Fallen has premiered ahead of the also-forthcoming White House Down with Channing Tatum and Jamie Foxx. Also offering up chow for action fans is RED 2, the follow-up to 2010’s surprise hit with Bruce Willis.

Next, after crafting their biggest movie to date with Western remake True Grit, The Coen Brothers return with Inside Llewyn Davis, a quirky looking dramedy more in line from what we’ve come to expect from the duo. Last off we have the clip for Middle Eastern epic Day of the Falcon (formally Black Gold) with Antonio Banderas and Mark Strong. 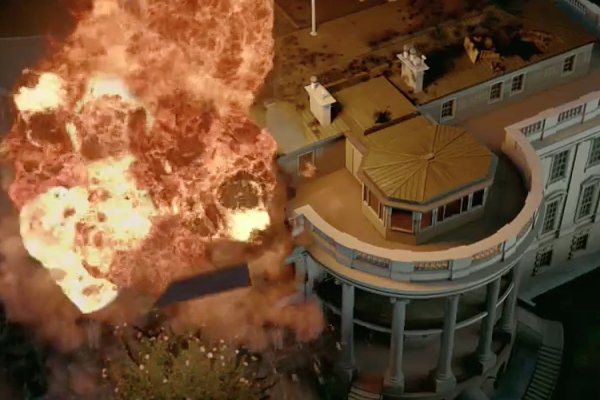 Along with many other instances of bizarre doppelganger years for films, 2013 will add to the list with two films centered around the siege and takeover of The White House and a persistent government agent who is the sole entity standing between the death of the President and the victory of the baddies. First out of the gate is Olympus Has Fallen from director Antoine Fuqua (Training Day, King Arthur) with Aaron Eckhart has the POTUS and Gerard Butler as the aforementioned agent extraordinaire.

Along with Stallone’s The Expendables franchise, RED also proved that in the right vehicle, past-their-prime action stars could be a viable draw for audiences of all ages. Bruce Willis, John Malkovich, Helen Mirren and Mary Louise Parker all return with new additions Catherine Zeta-Jones and Anthony Hopkins in what so far has unveiled itself to be a European-set adventure with the same brand of snarky, deadpan humor and big guns. I was a big fan of the original and I dearly hope that RED 2 keeps in the tradition of the first while avoiding the seemingly deliberate retreads we’ve seen in so many action offerings as of late. Only time (and a more revealing trailer) will tell.

Finding themselves squarely back in obtuse, dark dramedy territory, The Coen Brothers have brought us a first look at Inside Llewyn Davis, which follows a folk singer (Oscar Isaac) during the 1960s in New York City's Greenwich Village. Carrey Mulligan, John Goodman, Justin Timberlake and Garrett Hedland also star. Similar to the promotional material for their 2009 film A Serious Man, straightforward plot points are hard to come by, but a cat at one point makes an appearance. For me, this is squarely an “interest” film, one for which I will likely never be excited, but one I will watch closely as more footage is revealed and reviews start coming in.


Day of the Falcon

Set in the 1930 Arab States right before the oil boom, Day of the Falcon promises a sweeping epic blending ancient honor with modern money. Although that may be the case at a basic level, and while the trailer is certainly big on promoting those aspects, early word has been far less positive (even though it is the most expensive film backed by an Arab about an Arab subject – niche fact of the day). Carrying a Kingdom of Heaven vibe, “Day” seems like one of those expensive projects doomed Stateside, though when it comes down to the nitty gritty, only checking it out will reveal if the horrid reviews are deserved and if it was thoroughly doomed from the get-go.