Men in Black collides with Ghostbusters this week on Trailer Tracker with the first look at comic adaptation R.I.P.D. or the “Rest in Peace Department” if you will, starring Ryan Reynolds and Jeff Bridges. Also drumming up substantial buzz is the second trailer for Man of Steel which both expands its already epic scope and for the first real time showcases some of its action.

For a different but equally loyal crowd, it was the debut trailer for The Hunger Games: Catching Fire that made for some squealing, as the rising tensions on the continent of Panem is put front and center. Last but certainly not least is director Nicolas Winding Refn’s duo of clips for Only God Forgives with Ryan Gosling which promises a somewhat trippy, always violent revenge drama. 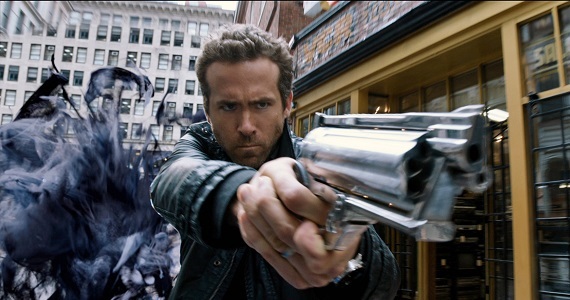 With that unavoidable prior comparison to some 80’s and 90’s classics out of the way, R.I.P.D. does seem to posses its own energy and fun visuals, not to mention what looks like a scenery-chewing performance from Jeff Bridges. If his character from True Grit suffered a psychotic breakdown and was raised by Colonel Sanders, we’d pretty much have Roy Pulsipher from R.I.P.D.. Essentially, it makes Ryan Reynolds look like the straight shooter (no pun intended).

It will ne interesting to see if this adaptation of the Dark Horse comic will be able to strike the right balance between humour and creepy, ghoulish imagery as some scenes look aimed at children while others for the late-teen crowd. While intriguing and filled with what look to be some fun ideas, I am completely up in the air as if this has minor hit written on it, or if it’s simply destined for the dumpster.

Among one of the most cinematic trailers I’ve ever seen, the second lengthy clip for Man of Steel is breathtaking in its pacing, attention to character and conservative use of action. If the end product is half as beautiful and mature in those regards, we have a massive summer hit on our hands. Among so many other things this latest trailer provides a first glimpse of Russell Crowe’s Jor-El and the fall of Krypton, General Zod in all his menacing glory and some fight sequences which employ some utterly badass pseudo-first person camera angles. As just a bit of promotional material this clip is breathtaking and as a promise for something more to come it’s something else entirely.

After obliterating the box office with the adaptation of the first novel in the popular YA series, The Hunger Games returns with Catching Fire and it’s clear already that the tone has darkened and the brewing revolution is at more than a simmer. While the second book is by no means centered on the rebellion (that plot line belongs to the third) they are certainly prepping for it, and the more gritty visuals are welcome. And as in the first film treatment, Catching Fire is keeping the actual tournament hidden. If this is due to the stage in post development where CGI has yet to be completed or if it is a creative choice is not known, but this first teaser promises great things to come.

Shrouded in a manic, obtuse sort of mystery (coincidently as is the case with director Nicolas Winding Refn and his films) Only God Forgives is ramping up something to see, even if that something isn’t clearly defined. The revenge and Tai boxing themes are on the table, as is a dynamic between cultures I haven’t quite seen before. But I can’t wait to see what is in store, and for now let these clips let you know what’s on the table.