It’s an insane week on Player Affinity with the release of the trailer for Martin McDonagh’s Seven Psychopaths starring Colin Farrell, Woody Harelson and Christopher Walken, a dark comedy about a group of doofuses who enrage a gangster thanks to their dog-napping operation. Next, Charles Dickens’ classic work Great Expectations gets the big-screen treatment yet again from director Mike Newell starring the likes of Helena Bonham Carter and Ralph Fiennes.

Also on the docket, Eric Bana and Olivia Wilde are brother-and-sister thieves in Deadfall. On the run after a casino heist gone wrong, their actions lead to an escalation of violence and betrayal in a remote Canadian town. Lastly, we have the first look at Brendan Cronenberg’s – as in son of David – attempt at twisted horror in Antiviral. The fever is spreading – it’s Trailer Tracker.

One Shih Tzu and seven psychopaths: the seemingly normal one, his best friend, the one with issues, the hot girlfriend played by a bond girl of course, the non-violent one, the passive-aggressive girlfriend and the one with the bunny. Such are the eclectic bunch of whackos that comprise Martin McDonagh’s aptly named Seven Psychopaths, the British director’s follow-up to the acclaimed dark comedy In Bruges. 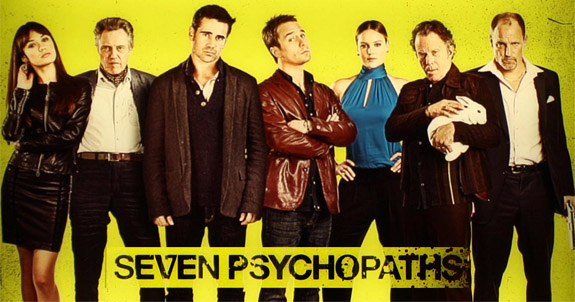 Colin Farrell, Woody Harelson, Christopher Walken, Sam Rockwell, Tim Waits, Gabourey Sidibe, Olga Kurylenko and Abbie Cornish all star in this off-kilter lark which tells the tale of a struggling screenwriter who gets caught up in a dog-napping scam that inadvertently pisses off a vengeful (and Shih Tzu-loving) gangster. If this story of arrested development is even a fraction as entertaining and memorable as In Bruges then it would make McDonagh a filmmaker to watch absolutely.

The trailer doesn’t delve too deeply into the specifics of the plot, and is more concerned with unrolling its impressive cast list then giving us a linear dissection of what exactly is going on. That being said, this first look has the quirky distinct style that has served this director and many of its cast members quite well in the past. This is a late-year release I’m beginning to go crazy for.

Over the last 80 years, Charles Dickens’ seminal work Great Expectations has had three big screen treatments, the most recent of which was Alfonso Cuaron’s maligned 1998 effort with Ethan Hawke and Gwyneth Paltrow (and is widely regarded to be the one blemish on the director’s career). Fellow “Harry Potter” alum Mike Newell (who directed Harry Potter and the Goblet of Fire while Cuaron helmed Harry Potter and the Prisoner of Azkaban), takes another shot and the result looks bleak, faithful and rather gorgeous.

Newell collects an incredible group of British actors, some well known and some less so. Jeremy Irvine (War Horse) will play Pip, Helena Bonham Carter the cruel Mrs. Havisham, Ralph Fiennes the mysterious Magwitch and Holliday Grainger the object of Pip’s affections, Estella. Grainger is having quite the run of starring in adaptations of classic novels having appeared in last year’s Jane Eyre, Bel Ami early this year and will also appear in Anna Karenina alongside Keira Knightly. With so many period dramas being released this year, it looks to be a tight race come awards time, especially when it comes to costume design and other technical categories (let the lacy smackdown begin!). Great Expectations will be released in limited release Nov. 30.

From the director of The Counterfeiters and starring Eric Bana and Olivia Wilde, Deadfall sends those involved to a chilly Northern town where a brother-sister crime duo try to hold up and avoid the authorities and the suspicious eyes of locals, particularly ex-boxer Jay (Charlie Hunnam) following the siblings landing on his doorstep. Early reviews have been mixed, with praise being given to its overall slickness and moments of effective tenseness, though it seems to tell a story that has been done many times before. Let’s hope it turns out to be more than just your normal standoff, thieves-on-the-run flick, because the talented cast certainly deserves more than a B-movie format.

The David Cronenberg gene seems to be alive and well in his son Brandon’s film Antiviral, a futuristic horror film in which the everyman can share the lives of celebrities – right down to the microscopic level. For fright flick fans, this looks to be a must-see of an effort and for everyone else, I’m sure they’ll find it to be off-putting trash. It’s certainly an ambitious and bleak looking trailer and it will be interesting to see if young Cronenberg’s work is more than just an instance of imitation.