He’ll have a Heineken—and probably not shaken. Our favorite suave spy, 007, is back in Skyfall, the 23rd outing for James Bond, and MGM has a first teaser. Also hot off the proverbial presses is the lavish look for Baz Luhrmann’s adaptation of the 1925 novel The Great Gatsby starring Leonardo DiCaprio as the titular Jay Gatsby. 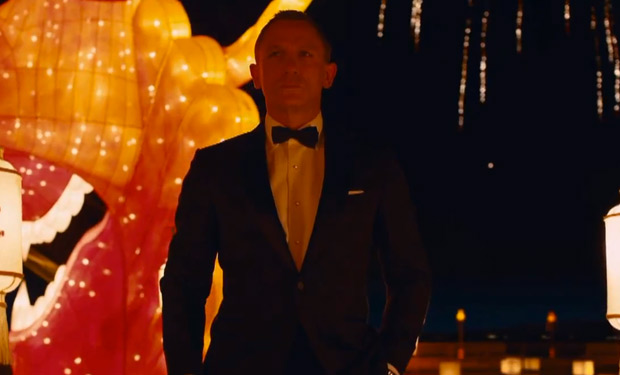 Such is how the little dialogue spoken in the teaser trailer for Skyfall goes (save his famous tagline) during what appears to be an interrogative debrief. “Appears to be” seems to be as apt a description as any pertaining to most of the footage unveiled, which is both exciting and foreboding, stylish and icy and entirely cryptic. Jumping from the U.K. to Turkey to China, this Bond adventure certainly promises to be as huge in scope as ever and with Sam Mendes at the helm we can be certain there will be a very human story at the heart of the action.

Little is known about the plot of Skyfall (this trailer helps with nothing in that regard) and we really only have the logline to go with, which goes like this:

“Bond's loyalty to M is tested as her past comes back to haunt her. As MI6 comes under attack, 007 must track down and destroy the threat, no matter how personal the cost.”

We can expect that the majority of this threat will come from Javier Bardem, who will portray the main villain, Raul Silva, who is described as having a personal relationship with the Double-O. I’d like to provide a bit more analysis, but with the quick-cut mayhem that is this trailer, sadly we’ll have to wait until a feature-length clip before we can fully speculate on if this anniversary outing will do its franchise justice.

There have been five adaptations (both loose and direct) of F. Scott’s Fitzgerald’s heralded work of fiction; from silent works, to one that became a lost print, to made-for-TV entries, but none have been quite as potent-looking as Baz Luhurmann’s upcoming 3D imagining. Coming off the disaster that was Australia, Luhrmann assembles the likes of Leonardo DiCaprio, Tobey Maguire, Carey Mulligan, Joel Edgerton and Isla Fisher, all swirling in the director’s trademark, hyper-vibrant style.

The Great Gatsby is required reading in many a classroom and has been touted as one of the quintessential works of American fiction. That being said, if you are not exposed to the source material, all this trailer will amount to for you is star-studded prettiness. It is those casual admirers Warner Bros. will have to hook, as what is no doubt a hugely-expensive film will certainly flop if they think the name “Gatsby” and the presence of DiCaprio alone will be enough to fill theaters. Let’s hope we experience greatness when the adaptation hits multiplexes Dec. 25.

If you’ve been staying classy (even if you’re not from San Diego) for the past eight years, then you’re no doubt hankering for another stint with the Channel 4 news team (or whatever they may be called after all this time). Aside from Christina Applegate’s Veronica Corningstone not yet being confirmed, the quartet of imbeciles that is Ron, Brian, Champ and Brick are all back (or so the personable teaser trailer succinctly explains, minus Brick of course). Many people—myself included—thought this would never happen, but considering how defining the original was and how much material can still be organically milked from these characters, hope was always there. This teaser is more an announcement rather than an actual trailer with actual content, but it can at least tide us over until we get an official glimpse.

Based on the true account of a visit from King George VI (yes the stuttering one) and Queen Elizabeth to Franklin D. Roosevelt’s home in New York State, Hyde Park on Hudson will star Bill Murray as the 32nd president and Laura Linney as his distant cousin and eventual mistress. The trailer takes a whimsical and comedic approach to the first visit of a British monarch to the U.S. on the eve of WWII and comes from Roger Mitchell, the director of acclaimed dramas Changing Lanes and Venus. We’ve never seen Murray in a role quite like this, and though I doubt this will become another smash like The Kings Speech, it should certainly appeal to the same crowd.