Wrinkled wise guys and big oil take front and center this week in the world of trailers with first looks at both Stand Up Guys with Al Pacino and Christopher Walken and Promised Land starring (and written by) Matt Damon.

Also on the docket is Gambit, a remake that is rarely of note due to being written by the Coen Brothers and starring the likes of Colin Firth and Alan Rickman. Last off is Stoker, a bizarre looking psychological thriller from the director of Oldboy and offering up the talents of Nicole Kidman and Mia Wasikowska. No witty segue needed, let’s get started – this is Trailer Tracker. 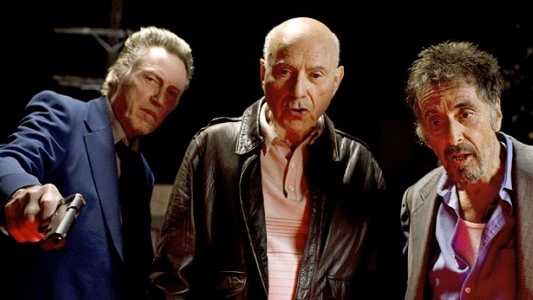 Doth mine eyes deceive me or does Al Pacino appear to be giving a restrained, earnest performance in a solid-looking film? Nah, that can’t be right. Regardless of what is going on in my mind, the hallucinations appear to resemble a film called Stand Up Guys, a dramedy about aging criminals with a great deal of baggage (and which along with Pacino stars Christopher Walken and Alan Arkin).

Pacino plays a recently paroled con man who is targeted to be killed in order to keep any long-gestating secrets permanent. The snag? He isn’t slated to be wacked by just any Joe Schmo hit man, but by his lifelong friend (Walken). Finding sympathy for one another, the two enjoy one last night as buds before the inevitable comes to fruition.

Stand Up Guys comes from director Fisher Stevens, who's mostly known for acting and won an Oscar for his documentary The Cove. Writing credits come from a first timer by the name of Noah Haidle, so with the combination of old-school veterans and fresh talent, this could actually turn into something special more in the vein of In Bruges than some clichéd novelty collaboration like Righteous Kill. Or maybe I am simply crazy.

Matt Damon wants your oil – and nobody says no to Jason Bourne! In Promised Land from Oscar-nominee Gus Van Sant, Damon’s Steve Butler is sent to Small Town to secure land rights for his corporation, but he finds unexpected friction from a local played by John Krasinski. Most interesting about this project in my opinion (and it’s certainly not the preachiness abundant in the trailer) is that Damon scripted Promised Land, his first script in a decade after Gerry, and Krasinski, who previously ventured into screenplay territory with the maligned interview-style dramedy Brief Interviews With Hideous Men. Now that’s not to say this collaboration will be a sure-fire success (I did say this team-up seemed interesting, not outright amazing), though everything on display from its director to its ensemble (which also includes Frances McDormand and Rosemarie DeWitt) has me sold on the fundamentals at least.

One of the very few screenplays from the Coen Brothers not to also be directed by the Oscar-winning duo, Gambit is a remake of the 1966 film of the same name about an art curator (Colin Firth) and his revenge plot against his despicable boss (Alan Rickman) by tricking him into buying a forged Monet painting with the aid of a feisty southern belle played by Cameron Diaz. Gambit seems much closer to Coen comedy fare such as Intolerable Cruelty or even The Ladykillers over Fargo or The Big Lebowski (which could be a plus or minus depending on one's opinion), and even though a remake, it’s far less a concern when it’s the Coen Brothers we’re talking about. Diaz seems like the wildcard in terms of acting talent, but the trailer is amusing and heist comedies usually go down smooth (the writing pedigree is far from a blemish either).

All over the place in terms of plot (but fascinatingly so), Stoker comes from Chan-wook Park, the South Korean auteur behind The Vengeance Trilogy and 2009’s vampire effort Thirst. With sniper rifles, spiders, lust, blood and nearly everything in between, Stoker (at the very least) promises something utterly distinct with its genre-bending, creepy approach. Mia Wasikowska takes the lead role as , a teenager who after losing her father must deal with the arrival of her uncle (who she never knew existed) and his mysterious ulterior motives after he moves in with the family. Mathew Goode (who is ironically great) plays the uncle and Nicole Kidman ’s mother, which rounds out a cast also including Dermot Mulroney and Jacki Weaver. It’s tough to even properly analyze this trailer so just take a look and judge for yourself.