It’s a dictatorship this week on Player Affinity: you are ordered to watch all of these trailers. Beginning with suspiciously relevant comedy The Dictator, parody-master Sacha Baron Cohen reunites with his Borat and Bruno director Larry Charles for this Middle Eastern Prince and the Pauper-esque lark. A cast of familiar comedians then unite for animated comedy Hotel Transylvania from Sony Pictures Animation, while time travelling Sundance favorite Safety Not Guaranteed gets its first trailer as well.

We also have another animated flick (this time from DreamWorks) in Rise of the Guardians about a familiar bunch of childhood heroes. Finally (but certainly not slumming it unless the rest of the world is wrong) we have at a look at the dramedy that is smashing records overseas called The Intouchables. Can’t touch this – it’s Trailer Tracker. 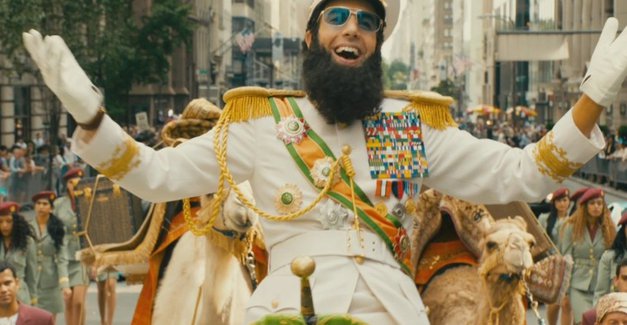 From a teaser trailer to viral videos to red carpet antics, Sacha Baron Cohen has been ramping up marketing efforts for his camel-out-of-desert political satire The Dictator and so far he has me sold. Cohen made a huge splash with Borat and while his follow-up Bruno wasn’t quite as successful, this writer still found it to be hilarious. The British comedian is fearless in his role commitment and will sacrifice just about anything to get a laugh; for that reason alone I always look forward to his next project. In The Dictator, Cohen plays Admiral General Aladeen, the oppressive and arrogant ruler of the fictional Republic of Wadiya who is stripped of his identity and left to fend for himself after a visit to America.

The first teaser merely set up the character and tossed in some funny jokes, whereas this peek hints a more complex character arc as he befriends an activist played by Anna Farris. That being said, there are still plenty of offensive (but poignant) laughs to be had that still remind us we have a great supporting cast to look forward to including John C. Reilly and Ben Kingsley. Not just because of the similar title, this effort reminds me of Charlie Chaplin’s The Great Dictator in its skewering of a relevant figure, square-peg-in-a-round-role setup and the amplitude of physical comedy. If The Dictator achieves success that equals even a fraction of that masterpiece, you can bet it will be one of the year’s best comedies.

What happens when those who usually hide under your bed feel more like resting upon it? They head to Hotel Transylvania of course, where all the ghosties and ghoulies spend their vacation days. Comedic talents including Adam Sandler (Dracula), Kevin James (Frankenstein) and Steve Buscemi (Werewolf) lend their pipes to this stylish-looking production from Sony Pictures Animation, the folks who previously brought us Cloudy with a Chance of Meatballs. The hook in all this is that an ordinary human being (voiced by Andy Samberg) wanders into the creepy establishment and causes a kink in the way of things. Not much else about the plot has been revealed, it is clear that this is going to deliver to us one of the few notable Adam Sandler performances of the decade. Too bad he had to be off screen to attempt it.

“Wanted: Someone to go back in time with me. This is not a joke. You’ll get paid after we get back. Must bring your own weapons. Safety not guaranteed. I have only done this once before.”

That closely resembles an actual personal ad that inspired three journalists to venture out to find this odd individual. Filmmaker Colin Trevorrow evidently thought it fascinating enough to turn these escapades into a feature film, which made many top 10 lists when it debuted at Sundance earlier this year. Safety Not Guaranteed stars Aubrey Plaza (Parks and Recreation), Jake Johnson (New Girl) and Kristen Bell as the investigators, and popular mumblecore filmmaker Mark Duplass as the adventure-seeking eccentric. This certainly seems to be the increasingly rare instance of a Sundance entry with mainstream appeal, which integrates its quirk in setup more than in wacky, hipster behavior and dialogue. Safety Not Guaranteed will hit theaters in limited release on June 8.

Rise of the Guardians

Similar to Hotel Transylvania, DreamWorks’ Rise of the Guardians finds recognizable creatures tossed together with (hopefully) hilarious results. I am far less sure that will be the case with this feature, however. “Guardians” stars Santa (Alec Baldwin), The Easter Bunny (Hugh Jackman), Jack Frost (Chris Pine) and The Tooth Fairy (Isla Fisher) who (while performing their regular annual duties) also fight the forces of evil that aim to converge on humanity, chiefly The Boogeyman (Jude Law). Perhaps it is simply the briefness of the trailer that makes this film come off as so messy, but the premise seems – to put it bluntly – too dumb to work, and the “action” looks embarrassing at best. Hopefully with a longer look, Rise of the Guardians will reveal a clever, family-friendly offering and not just another second-tier animated flick that calls to mind the DreamWorks of old.

With more than $290 million internationally in the bank (and much more to come), French dramedy The Intouchables is a global blockbuster of the rarest kind. Based on a true story, The Intouchables finds a poor black man who discovers an unlikely friendship with a crippled millionaire for whom he cares. The Weinstein Company has acquired North American rights to the film and have set a release date for May 25, with limited expansions planned from there on. So, if you want to see what the global hype is about and why The Intouchables was voted “cultural event of the year” by 52 percent of France, mark your calendar.