Trailer Tracker: The Iceman, The Company You Keep and More

Hitman meets butter carving this week in the wacky world of trailers (we’ve even got a sex comedy and a political thriller to stuff in between). First off is The Iceman, based on the life of mob enforcer Richard Kuklinski, who killed over 100 people between 1948 and 1986 and stars Michael Shannon as the titular assassin. Robert Redford heads back behind (and in front of) the camera in The Company You Keep, a thriller centered on a political activist and fugitive whose cover is blown by a young reporter (Shia LaBeouf).

Then, in the satire Butter, Jennifer Garner plays a competitive woman with aspirations of grandeur who partakes in an annual butter-carving competition where delicious hijinks inevitably follow. Finally is the red-band trailer for The To-Do list and narrated by Parks and Recreation’s Aubrey Plaza (who stars) about a woman who seeks to become more sexually experience before heading off to college. Here on Player Affinity we have plenty of experience — with movies. This is Trailer Tracker. 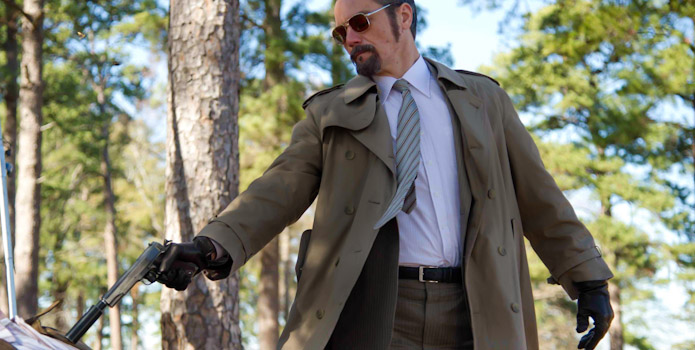 For nearly 40 years, New Jersey native Richard “The Iceman” Kuklinski operated with impunity, boasting to have killed more than 100 people for fun, for practice or in service to the DeCavalcante crime family in New York City. Here, The Iceman is played by character actor Michael Shannon (his character gets his name from his method of freezing bodies after each murder to mask the time of death) and is joined by Winona Ryder as his unsuspecting wife, Ray Liotta as another mob enforcer and Chris Evans as a partner of Kuklinski's.

It’s clear from the trailer that this film from director Ariel Vroman (in his first mainstream effort) will chronicle the full bloody career of Kuklinski evidenced by Shannon’s changing wardrobe and hairstyles. A number of The Iceman’s most infamous crimes (and crime sprees) are also highlighted, including the one killing he regrets (look for the praying man in the clip) as well as his “practice murders” of homeless men. This gory trailer is certainly not shying away from the infamously violent life of this sadistic mass-murderer and looks to be an enthralling thriller with great performances throughout. The Iceman will premier at the Venice Film Festival.


The Company You Keep

Shia LaBeouf continues to keep his word and stay away from big-budget studio efforts with The Company You Keep, which is directed by and starring legend Robert Redford. After posing as an attorney for 30 years, a former member of activist group Weather Underground (Redford) has his cover is blown by journalist Jim Grant (LaBeouf), which sets off a manhunt. The remaining ensemble cast at play here is nothing short of mind-boggling and includes (you ready?) Julie Christie, Sam Elliot, Brendan Gleeson, Terrance Howard, Richard Jenkins, Anna Kendrick, Stanley Tucci, Chris Cooper, Nick Nolte, Susan Sarandon, Stephen Root and Brit Marling – holy friggin’ crap. This looks like a nice tight thriller with a blast of real-life intrigue and if this cast can’t pull off the material then it was doomed from the start.

From Parks and Recreation and this summer’s acclaimed Safety Not Guaranteed, Aubrey Plaza is certainly on the way to more widespread notoriety. In The To-Do List, Plaza stars as Brandy, a high-school grad who feels she needs to become more sexually experienced before heading off to college (where were all these girls when I went to high school?). Clark Gregg, Christopher Mintz-Plasse, Andy Samberg, Bill Hader and Donald Glover also star in what should be a fun spin on the usual teen sex comedy which finds nerdy guys looking to get laid before the big move. The trailer doesn’t give us much, but the fact that Plaza made me laugh just in her narration gives me a great deal of hope for The to-Do List.

Satire gets the artery-clogging treatment in the dark comedy Butter, a politically driven farce masked with the bizarre context of a butter-carving competition in small town Iowa. Jennifer Garner, Ty Burrell, Olivia Wilde, Rob Corddry, Ashley Greene, Alicia Silverstone and Hugh Jackman all star. Although its debut at last year’s TIFF garnered split opinions, the trailer is quite amusing and it will be really interesting to see this eclectic cast (it’s great to see Burrell moving beyond Modern Family )work through such a ludicrous premise without too much mugging or obvious platitudes.