Trailer Tracker: The Last Stand, The Impossible and More

With cheeky one-liners, explosions and gunplay front and center (not to mention a heavy dose of unavoidable nostalgia) the first trailer for Arnold Schwarzenegger’s solo comeback project The Last Stand is here. We’ve also got the first trailer for The Impossible, a true-to-life tale of survival amidst the 2004 Tsunami that devastated Indonesia starring Naomi Watts and Ewan McGregor.

Also starring an “Expendable” alumnus is Bullet to the Head with Sylvester Stallone as an aging hitman forced to team up with Han from The Fast and the Furious to take down leader of the Dothraki Khal Drogo – or something close to that at least. Finally is one of the worst trailers I’ve eve seen for a major Hollywood release in The Frozen Ground with Nicolas Cage and John Cusack as a cop and serial killer respectively who match wits in Alaska. 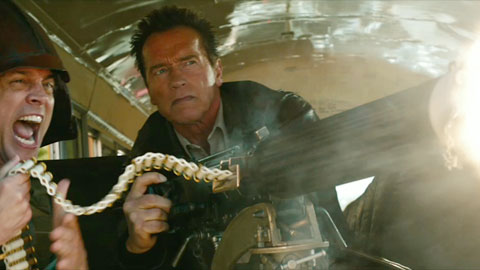 In The Last Stand we’ll find The Governator himself as the grizzled Ray Owens, the sheriff of the small southern town relegated to the boonies after a botched operation during his time with the LAPD. However, following an escape from the FBI, a drug kingpin (and his heavily armed gang members and a hostage) are all heading toward his town where the police are preparing to make a last stand before they attempt to cross the border.

With Forrest Whitaker, Johnny Knoxville and Rodrigo Santoro also starring (and coming from the great South Korean director Kim Ji-woon who helmed Spaghetti Western The Good, The Bad, The Weird), this will be an eclectic effort in terms of cast and if the trailer is any indication, a huge heaping pile of fun that should play right into Schwarzenegger’s core strengths.

The one thing I hope will be avoided across the comeback slate for the Austrian Oak (which also includes The Tomb and Breacher and likely The Expendables 3) is the overuse of age references and nods to his past works. It fits in an intentional B-movie ensemble like The Expendables, but let’s not make it a staple of the man’s efforts to come.

Rife with terrifying imagery, the trailer for The Impossible promises a harrowing tale of survival for one family, whose vacation turned to a nightmare in the (literal) wake of the 2004 tsunami. From the director of The Orphanage, Juan Antonio Bayona, and starring Naomi Watts and Ewan McGregor, The Impossible does look a tad pat and somewhat manipulative in its parents-searching-for-their-kids storyline but the talent on display is strong and considering it is based (apparently quite closely) with true events, we certainly have the chance for a thrilling bit of melodramatic filmmaking.


Bullet to the Head

Following his successful self-resurrection in the movie industry, Sylvester Stallone will step into the lead role in Bullet to the Head, the first original (non “Expendable”) property since 2001’s mega-flop Driven ,which essentially killed his career until 2006’s Rocky Balboa. Bullet to the Head will find Stallone as a hitman seeking revenge for the murder of his partner (and subsequent kidnapping of his daughter), which leads to a team-up with a cop with a parallel grudge. Like The Last Stand, this effort is extremely self-referential and chock-full of throwback action, which considering how Stallone has revived his name, is not much of a surprise. The trailer speaks for itself in terms of what it has to offer and from director Walter Hill (The Warriors) certainly has the proper roots to be a fun early 2013 offering.

And so leads us into the heaping mound of (chilly) excrement that is the trailer for The Frozen Ground, the cat-and-mouse “thriller” which finds Nicolas Cage’s cop hunting for John Cusack’s long-operating Alaskan serial killer. Honestly, when this clip debuted I thought there was some kind of mistake and this was a rough draft run through a Vaseline filter or a fan-made trailer of some kind. There is no structure, cheap-looking camera work, tells us nothing about what the film will actually provide us with, is without style, tension or a hint of good performances. Considering that the promotional material for Cage’s recent string of garbage looks 100-times better than what is supposed to be a (now rare) serious effort, I am left with few words other than, "what the hell?"