With reigns, trains and spurred heels, we finally get a first look at Gore Verbinski’s The Lone Ranger, an interesting and rather dramatic trailer derived from an infamously troubled production for Disney that will nevertheless see the light of day. On the lighter side of things, the trailer for comedy Identity Thief has arrived, starring Jason Bateman and Melissa McCarthy as the victim and scammer respectively. Also we have the raucous and lewd red-band trailer for mega-ensemble comedy Movie 43, which takes a sketch comedy approach.

Just having hit the 'net is the trailer for DreamWorks’ The Croods featuring the voices of Nicolas Cage, Ryan Reynolds and Emma Stone, and last off is found footage sasquatch thriller (never thought I’d type those words) Bigfoot: The Lost Coast Tapes, which as you likely can imagine, takes a horror approach to searching for North America’s most infamous creature of lore. Some things are better left alone, but trailers aren’t one of them. This is Trailer Tracker. 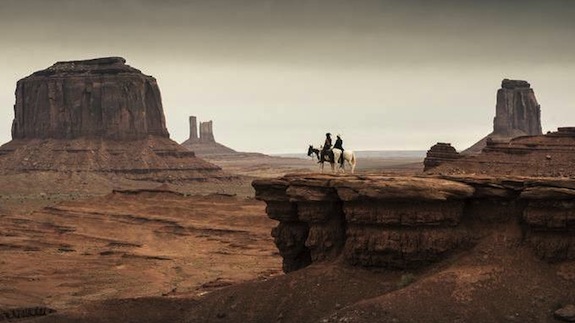 Script rewrites, scheduling issues, on-set deaths, budgetary concerns, thy name is The Lone Ranger, Disney’s ambitious Western epic which draws its inspiration and characters from a brand that began on a 1933 radio show. However, after all the troubles on director Gore Verbinski’s shoot, visually at least, it looks as if the money was well spent. There appears to be a great deal of stunt work and practical effects on display, not to mention a number of full-sized vintage trains which will play a large role in the plot of The Lone Ranger, specifically the birth of the First Transcontinental Railroad (or so it appears).

The Social Network’s Armie Hammer will play John Reid (a.k.a. The Lone Ranger) and Johnny Depp the more eccentric role of Tonto, The Ranger’s trusted right-hand man. Financially, Disney is putting a lot on the table with this film (see: John Carter) and Depp, while mostly a reliable draw, has his fair share of stumbles as well. Although the brand is not overly well known, phrases “Hi-yo, Silver! Away!" and Tonto’s referral to John Reid as “Ke-mo sah-bee” (as spoken in the trailer itself) are still used frequently as off-color references in movies. In spite of that, if the more serious tone and Depp as a paint-smeared, accented, Native American will sell still remains to be seen.

From Seth Gordon, the director of Horrible Bosses, comes another wild comedy in Identity Thief, which as the title suggests, involves some pilfering of one's (financial) existence. The hook here is it’s a woman (Melissa McCarthy) doing the stealing and Jason Bateman’s Sandy the victim (those unisex names always come back to haunt you). It’s good to see McCarthy isn’t simply replicating her Oscar-nominated character from Bridesmaids and there are some amusing moments in this trailer, however there seems to be a spark missing from Identity Thief (not to mention in this clip alone Bateman’s character gets punched in the throat on more than one occasion). Hilarity must ensue.

The overprotective parent angle is apparently alive and well in animation as after Brave and Hotel Transylvania tackled the subject we will next get The Croods, a stunning-looking prehistoric adventure that seems content on utilizing a well-worn story arc to entertain the little ones (and not subtly I might add). The voice talent is as strong as the graphics with the likes of Nicolas Cage, Ryan Reynolds, Emma Stone, Catherine Keener and Clarke Duke starring as the titular family who is forced into the savage (but beautiful) world after their cave is destroyed in a landslide. Hopefully the talent on display can bring the laughs and make us forget that at a root level, we’re witnessing something we’ve seen dozens of times before.

Starring – deep breath – Kate Winslet, Halle Berry, Elizabeth Banks, Kate Bosworth, Gerard Butler, Josh Duhamel, Anna Faris, Chris Pratt, Richard Gere, Terrence Howard, Hugh Jackman, Johnny Knoxville, Chloe Moretz, Justin Long, Leslie Bibb, Liev Schreiber, Naomi Watts, Seann William Scott, Emma Stone, Jason Sudeikis and Uma Thurman ... and directed by (among others) Peter Farrelly, Elizabeth Banks, James Gunn, Bob Odenkirk and Brett Ratner — this vignette-style comedy shows off its crudeness in this first red-band trailer and you know what? I laughed – quite a bit. The cast may be the hook in the case of Movie 43, though it seems like there might be some successful humor behind all those famous faces. This is one to keep an eye on.

Ya, I know. Yet another found-footage flick that has a bunch of naïve imbeciles running from creature-x all while never turning their camera off. What has Bigfoot: The Lost Coast Tapes making me a bit more curious than normal is it seems to be going more the approach of Troll Hunter, which was an effective and intelligent spin on the fantastical even though it used the now rather clichéd shaky cam approach. Which route this film will go is anyone’s guess, but considering the overall track record for the genre, it’s hard to be truly optimistic.