The demo for Transformers: Fall of Cybertron was released earlier this week for Playstation Network and Xbox Live Marketplace. The rather hefty demo offers players a taste of both of the game’s single-player and multiplayer campaigns. The game, which is a sequel to 2010's well-received Transformers: War for Cybertron, is set to release in three weeks. It seems that Activision and High Noon Studios were able to successfully address several of the mistakes from the previous game and, from what I’ve played so far in the demo, fans of the last game and the franchise should feel right at home with Fall of Cybertron.

The single-player portion of the demo features two levels; the first of which is a tutorial that has players assume the role of Bumblebee. Megatron’s forces are attacking the Autobots’ main ship during their flee from Cybertron, and it is up to Bumblebee to help out Optimus Prime in stopping the invasion to progress through the storyline. If you’re familiar with the controls from the last game, they’re pretty much the same from the first game—it’s a standard modern third-person shooter with the added ability to transform your character to vehicle form with a click of the left thumbstick. Health and ammo pickups are plentiful for an added layer of security.

The demo’s second single-player level takes place a bit later in the game’s story and has players assume the role of Vortex, in order to showcase the flight controls. It only takes a minute to learn them and they’re simple enough to get you going, but the mechanics can potentially be difficult to master, especially if you forget about ascending and descending. The level is also paced differently, as it incorporates infiltrating a base from the skies and leading a ground assault afterwards. The campaign should be around the standard length for most modern third-person shooters, and with the game’s large amount of playable characters, it is shaping up to be a fun ride. 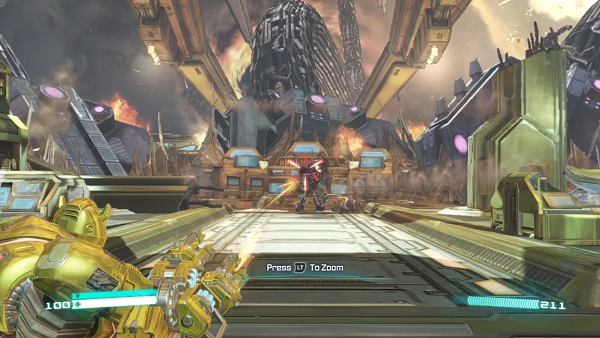 What will keep people going in this demo until August 21, however, will be the multiplayer campaign. There are two modes available, Team Deathmatch and Conquest, available to play in the one map offered. Team Deathmatch is the multiplayer standard that has players team up either with the Autobots and Decepticons to rack up kills, while Conquest has players on both sides capturing certain areas to score points. Also available for players to mess around with is character customization for all the playable classes. Players can customize their classes’ looks, colors, weapons and abilities. Of course, only a few choices are available.

The four classes themselves cater to different play styles. The infiltrator and destroyer classes fit in the middle of the road, offering average weight and mobility in both forms. The Titan class is your heavy class, a slow-but-powerful tank character that can one-shot-kill enemies with precise aim. Finally, the scientist is the lightweight option, bringing the highest speed and mobility and lowest strength. Special abilities help to keep the classes varied—the infiltrator can cloak itself to escape certain situations, the destroyer can put up a defensive shield on the map and the scientist can heal teammates. 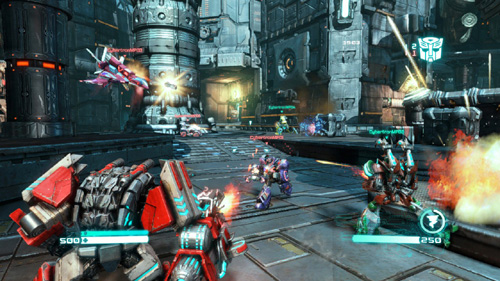 Once you’re in action, multiplayer matches are fast, frantic and fun. It went through some changes from War of Cybertron, but I like the simplified approach this sequel has going so far. Each class has a level-up system allowing players to unlock more weapons, abilities and customizable parts for cosmetic purposes. The experience points system is your standard multiplayer shooter fare, providing bonuses for killstreaks, controlling choke points, etc. Also, there are special pickups that can temporarily buff up certain stats such as damage, health regeneration and ability cooldown.

Overall, the Transformers: Fall of Cybertron demo gives players a great taste of what is to come in the final game. That said, the demo's campaign levels' low resolution and missing textures imply that they're from an earlier build of the game, especially on PS3. I do hope that is resolved in the final game, since the Xbox 360 demo does look better in comparison. At least, the demo runs well with a consistent framerate of 30 frames per second. The soundtrack should be a great addition, offering theater-style background music, as if players are watching one of the Michael Bay movies. If you’re excited to play another third-person shooter, I highly recommend giving the demo a shot because it definitely gave me a good impression.Transformers: Fall of Cybertron comes out on August 21 for Playstation 3, Xbox 360, and PC.