True Blood – In the Evening Review: The Stories Begin to Come Together

Another one bites the dust in True Blood’s seventh episode of season six. While the show’s storylines are moving at very different paces, “In the Evening” is still a strong outing for the series, successfully combining comedy and dramatic tension to propel the show toward its rapidly approaching finale. With only three more episodes to come, we have now reached the stage in which True Blood traditionally begins to push its stories to their peaks. As things stand, the vampire-human war is certainly poised for its climax in the next two episodes. However, the Alcide/Sam story is still lagging behind.

Let’s start with the episode’s death, wherein we had to say goodbye to Nora, beloved sister of Eric. Just when she was starting to become more interesting than annoying, Nora has to leave us (considering Terry’s character became interesting mere moments before he died last week, this seems to be an emerging trend on the show - be afraid if Sam or Alcide becomes complex or intriguing over the coming weeks). But what a way to go. 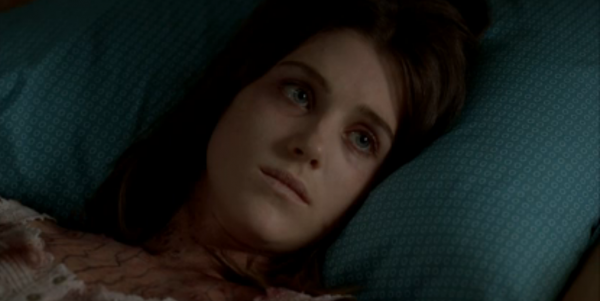 In Nora’s final moments, we see her vampire origin story. One of the English king’s favorite bedmates (since the date was given as 1665, that would make it Charles II on the throne), Nora was in London tending to plague victims when she was struck ill with the virus. Eric saw courage in her that caused him to take her to Godric to be turned, saving her life and creating a sibling bond that would transcend centuries. I really wish we had been privy to this backstory earlier, as it helps to explain some of Nora's actions last season, as well as the deep bond between her and Eric.

With both Terry and Nora’s deaths, we had time to accept that they were likely not long for this world (although in both cases, we also had time to hope there would be some reprieve). While Terry’s death from last week reverberated into this episode but will likely not have a huge impact on the major storylines moving forward (more on that in a bit), Nora’s death is felt immediately and will likely have a powerful impact on Eric’s actions throughout the rest of the season.

Seeing the anguish on Eric’s face (and knowing that his mission now will be to bring down the humans responsible no matter what the cost) we can anticipate an explosive few episodes to come. And since we know Billith’s prophecy must come true in some way (I’m guessing at least some, if not all, of our favorite vampires will get Warlow’s blood before they meet the light), I’m really looking forward to seeing how it plays out. 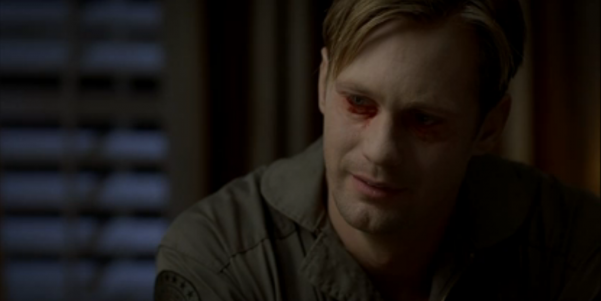 This episode’s other highlight came during the tense, yet hysterical, scene at the Bellefluer mansion. After her talk with her children regarding Terry’s death becomes too much to bear, Arlene turns to alcohol to numb the pain, with truly funny results. Of particular note is the look on her face upon realizing the Vampire Bill has really appeared in her home during the daytime. Carrie Preston has had quite the workout over the past two weeks, with Arlene spending time sobbing with Sookie, angrily accusing Lafayette of knowing that Terry was going to die, and then exercising her comedic skills with drunk Arlene. While Preston is often underused on the show, her performance has been top notch over these past few weeks.

The scene at the Bellefleur mansion goes from comedy to high tension drama with the arrival of Billith, who is still able to walk during the day (I'm interested to see how long Warlow's blood will continue to impact Billith in this manner). Taking the focus away from Terry and putting it back on Sookie (as so often happens whenever Sookie is in a room with vampires), Billith demands that Sookie produce Warlow, telling her that the lives of her friends (Tara, Jessica, and yes, even Pam) hang in the balance. Presented with this news, we are left to wonder if Sookie will once again dive back into the realm of the vampires and take steps to save them (I’m fairly certain we all already know the answer to that one - Sookie can’t seem to help herself where vampires are concerned). 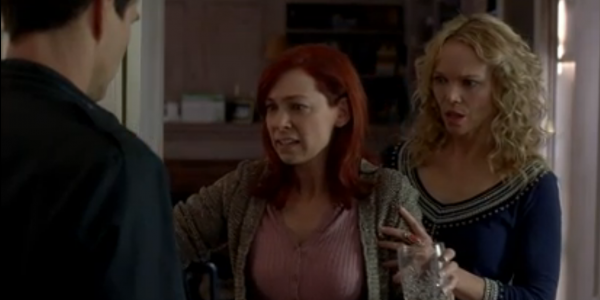 Three episodes of season six remain, and I’m still not sure if the show will managed to integrate all its stories into one. However, if it keeps killing off characters at this rate, we might not even have to worry about that anymore. One thing is for sure: things are heating up in Louisiana, and it looks like only Sookie can save the vampires now.

-- Oh Jessica. It’s great that you have feelings for James (even though it’s a bit sudden). He’s a lovely guy. But telling him about the tainted TruBlood might come back to haunt you - especially if he tells all his friends and the humans figure it out.

-- Just like I suspected, Sarah Newlin outplays Jason. It’s nice that Jason is under the mysterious vampire lady’s protection (who is she, anyway?) but he’s certainly in dire straits.

-- Speaking of outplaying, Pam completely manipulates the therapist. Although my stomach is rolling at the thought she might have slept with the guy. Well, anything to get her back to Tara, right?

-- Oh hey, Portia and Holly’s sons! Long time no see! Is it just me, or is something not good going to go on between Holly’s sons and Andy’s daughter?

-- Things are looking not so great for packmaster Alcide. Maybe he’ll be the next one on the chopping block?

-- It looks like Sam thinks the Pack might be behind Terry's murder. So naturally, he heads back to Bon Temps rather than saving himself. Sam is so noble, but always seems to get shortchanged in storylines.

-- It was great to see Eric and Bill interact once again. Their interplay is always fun to see, especially this time when it was Bill in a clear power position over a desperate Eric.

-- Finally, I was kind of with Warlow in terms of what I thought Sookie was agreeing to with their romp in faerieland. Maybe not marriage, but certainly not the no strings attached scenario Sookie claimed it was. Honestly, the whole thing seems pretty forced and way too soon. Hopefully we lose Warlow as well before the season is over, as he’s starting to just become plain annoying now.