True Blood – Who Are You, Really? Review: Heavy on Blood, Light on Plot Development

True Blood’s sixth season premiere “Who Are You, Really?” provides far more questions than answers, particularly with regard to whatever entity the vampire formerly known as Bill Compton (and who, until we know different, will henceforth be known as Billith) really is. While there is plenty of blood, nudity, and sex, there's also precious little in the way of plot development.

Now, True Blood is certainly not in the same league as shows like Breaking Bad or Mad Men, but it works as a weekly hour of escapist fantasy drama. And when the show is really on point, it can be excellent (think Hoyt’s mind wipe from season five). But after leaving us on such an intriguing (if slightly nauseating) cliffhanger, like the show did last year, I was hoping for at least some answers to get this season off to a roaring start. While one of last season’s most pressing (and, frankly, kind of annoying due to the drawn out nature of the reveal) questions was indeed answered (Surprise! Rutger Hauer is playing Warlow! Or is he? Hauer is also credited as “Niall,” who is a pivotal character in the novels), we were left in the dark regarding the true nature of Billith, what’s going on with Andy and his new batch of half-fairy children, Jason’s hallucinations, and the state of Alicide’s new pack (although things are looking up for Alicide, at least).

A season premiere is a chance to begin launching the season’s arcs, particularly for a show like True Blood, which generally relies on the use of one central story arc that is accompanied by several B or C arcs for characters not involved directly in the main action (think last season, with the Authority story, Terry’s smoke monster, and Alicide’s pack woes). This episode gives us peeks at what might be the season’s stories (the human-vampire war, which looks like the main storyline, Andy’s children, Warlow, and the pack), but doesn't really tell us anything we didn’t already know from last year. Aside from the possible reveal of Warlow’s physical identity and Luna’s death (which, in my opinion, is one of the episode highlights, particularly if it means Sam gets a good storyline this year), a fan would be fine not even watching the episode and just checking out next week’s episode. 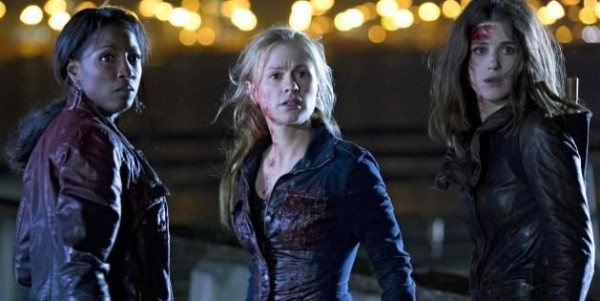 Despite being short on plot development, the episode is fairly successful in executing its theme: the differing relationships between parents and children. We have Andy, who is terrified of screwing up his four children, until Arlene offers a beautiful speech on the joys and fears of parenthood that spurs Andy into daddy-mode (although Andy is probably going to need another pep talk now that the kids grew into toddlers in roughly six hours). There is Billith and Jessica, who have reached the teenage stage of their maker-vampire relationship, with Billith trying to summon Jessica home and her refusing, only to have the pair make-up again upon her return. Finally, and perhaps the most hard to watch of them all (not taking into account watching Billith nearly rip Jessica’s heart out of her chest), Eric and Pam; Pam still wants her “father’s” love and approval despite being out on her own, but Eric no longer believes he needs to be there for her every step of the way and wants her to strike out unassisted.

Giving us these three distinct stages of the parent-child relationship allows for some emotional depth and character development, but, for the most part, the stories are simply a rehash of plotlines that were dealt with during the end of season five. In order for these characters and the story to grow, we need to see what season six will give us that will be new compared to last year. I understand that a season premiere can only show us so much, and that there are 12 episodes left this season, but I expected a bit more coherent breakdown of what we can expect from season six (at least from a storyline perspective). Instead, we are treated to what amounts to part two of the season five finale, with a muddled series of storyline threads. Hopefully, episode two will clear things up a bit more. 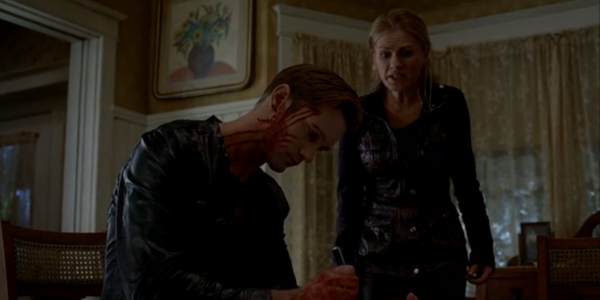 -- The episode’s big death, which was teased by producers prior to the premiere, turns out to be Luna, Sam’s shifter girlfriend. I never particularly cared about Luna (although her daughter makes an adorable puppy werewolf), so I'm not particularly broken up about it. Hopefully this will give Sam a chance to shine, although I worry that it will separate him more from the central storyline - which would be a huge bummer.

-- One of my main problems with True Blood is that when characters are not involved in Sookie’s storyline (which is always the season’s central storyline), their peripheral story often feels like it’s taking away time from the more interesting Sookie arc. This was the case with Alicide’s story last year, the Jason and the werepanthers story from a few years back, and a lot of the Sam stories over the years. And it looks like Alicide may again be relegated to a story that has little to nothing to do with the Sookie story. Granted, this could change over the course of the season, but every time they cut away to Alicide’s story, I instantly wish we were back with Sookie, Eric, and company.

-- This next point ties in a bit with the one above. While I understand that sex and nudity are hallmarks of True Blood, I really could do without the three-way between Rickie, Alicide, and Danielle. It's tangential to the plot at best, and takes time away from figuring out what Billith is or even spending time with Andy and his fairy children. And I promise I’m not just picking on True Blood - I’ve made this same complaint about Game of Thrones several times in the past.

-- Is it just me, or is Nora way less annoying this season? Or is it just because she’s no longer making goo-goo eyes at Eric?

-- I miss the old Jason. This new angry version isn’t much fun.

-- The governor of Louisiana reminds me a bit of the Mayor from Buffy the Vampire Slayer - charming as hell, but extremely dangerous.

-- Show of hands of those who think simply rescinding Eric’s invitation will let Sookie live her life again. Especially after the look on Nora’s face when she discovers that Eric is in love with Sookie.

-- Finally, I have to offer a tip of the hat to Deborah Ann Woll for her work this week as Jessica. I love watching all scenes between Jessica and Sookie, as their mother-daughter interactions are a joy. But her work alongside Stephen Moyer is particularly strong this week. From her fear and worry over what Billith might be, to her willingness to gloss over all her questions once her father told her he loved her and would protect her, my heart goes out to Jessica, who still just wants a parent who loves her.