“You’re No Good,” True Blood’s third episode of season six brings back some old favorites and starts the process of linking the season’s storylines together. While Alcide and Sam’s storyline still appears to be a problem (at least in terms of tone and its tenuous connection to the show’s main action), the show’s other storylines are firing on all cylinders and hitting the right notes.

Let’s tackle the good before we get to the troubling portion of the episode. One of True Blood’s problems in past seasons was waiting too long to begin building the season to its climax. Characters would begin to languish in their storylines, sometimes to the point where fans began to stop caring, before the writers would start to link together the seemingly unrelated stories together. Not so this year. This episode brings us our first clear connection between unrelated stories, and it’s one I certainly didn't see coming.

While I have enjoyed the “Andy is the father of four half-faerie girls” storyline so far (Chris Bauer is so good at playing comedy, as well as portraying the always-put-upon Andy), I was starting to wonder where it would lead. Would we just wait for several episodes for the girls to grow into adults and have them meet up with Sookie or Niall? Nope. The writers have crafted an even better twist. 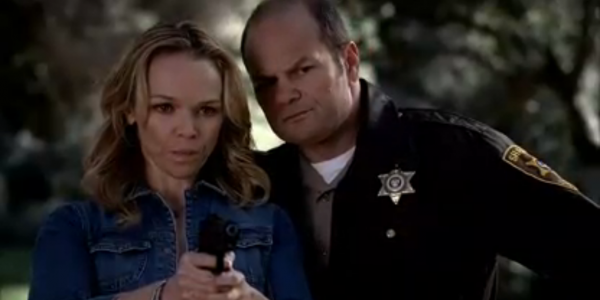 After unsuccessfully trying to survive in the sunlight, Billith decides that he needs to create a new blood substitute out of Sookie’s magical fae-infused blood that will allow vampires to walk in the sun (after all, his hallucination of Lilith had them both hanging out in the sunlight, so that has to be what she wants, right?). Unfortunately for Billith, Sookie wants nothing to do with him. So, poor Billith is left without a source for his new concoction. Enter Sheriff Andy, driving around in his squad car checking for vampires breaking curfew. After exchanging a few pleasantries, Billith notices an enticing smell coming from Andy’s car. It looks like Billith has found a blood source for his new blood substitute!

The other wonderful part this week’s episode is the return of two of True Blood’s best guest stars. First, the lovely Anna Camp is back as Sarah Newlin, the long suffering wife of Steve (who has also returned after two episodes away). It seems Sarah landed on her feet after Steve left her (and cleaned out their bank account) on his way to becoming an out and proud “gay vampire American.” Rather than continue trying to enact change from the pulpit, Sarah is now in politics (after the successful release of her tell-all book about her marriage to Steve). I’m crossing my fingers that this isn’t the last we see of Sarah and Camp (maybe she’ll take pity on Steve and save him from the vampire research facility?). 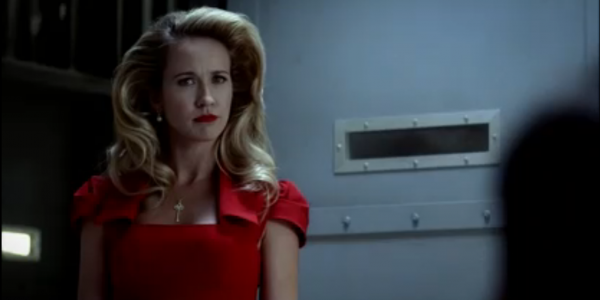 Also back after a long hiatus is Fangtasia’s trusty (but missing a few too many brain cells) barmaid, Ginger. A constant source of comedic relief in the midst of a tension filled scene, it's great to have her back and protecting Eric. In fact, all of this week’s Eric/Pam/Tara scenes are strong, combining vicious barbs (Pam and Tara are both experts in the art of sarcasm) with high tension. While Eric can thrive alone (something not many of the show’s non-Sookie characters can claim), he is always a stronger and more interesting character when paired with Pam. I’m excited that it looks as if both will be spending a good portion of the season together (something that was sorely missing last year).

Finally, we come to the episode’s most troubling and disappointing storyline - Alcide and Sam. Not only does it look like we’ll spend at least part of the season dealing with the push and pull of little Emma’s custody, it appears the show has turned Alcide into a completely unlikeable character. Yes, Alcide is part of his pack again, which would lead to him becoming more animal than he was in the past. But this Alcide is mean, hangs around with people who threaten small children and kill humans who are trying to leave their land, and has no respect for people he once considered friends. Alcide has also lost control over his pack (as witnessed by the slaughter of Nicole’s friends). I don’t like who Alcide has become, and his story has no direct link to the central vampire storyline.

As much as it pains me to say it, this Alcide - and by extension Sam - no longer fits into the show anymore. I’m guessing the whole “coming out” as a shifter or were facet will eventually link into the main storyline, but I’m not sure I’ll care enough about either character once it occurs. The show has some major damage control to do with the character of Alcide if they want to make him likeable once more. 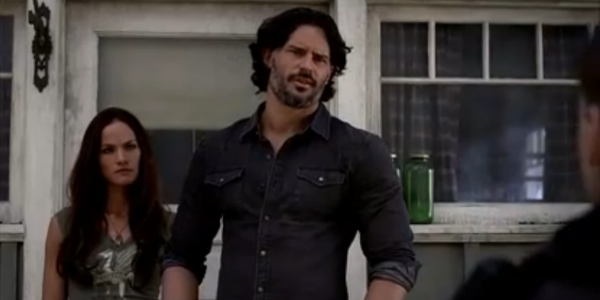 -- Okay. So Jason is suffering from hallucination and debilitating headaches? How long until we discover he has a brain tumor?

-- I don’t trust Ben at all. I’m not sure I’d go as far to say he’s working with Warlow, but his appearance is just too coincidental. I mean, it can’t take a full day to find your way to the faerie field. And why didn’t the vampire drain him of all his magical blood when he had the chance?

-- I really hope Lafayette gets something to do this season.

-- A moment of silence for the massacre in the faerie club. It's pretty brutal, and I’m sad to see Claude go. While the show has steered away from the Charlaine Harris novels quite a bit by now, I really hoped we’d get to see the Claude from the books. Alas, like his sister Claudine, he is gone too soon.

-- Rutger Hauer has been a stabilizing presence on the show. I’ve thoroughly enjoyed Niall so far, and I hope he does indeed stick around for the rest of the season.