Only-in-Greece News
Deadline Hollywood reports that Downton Abbey featured prominently in Greek politics this week when a season one scene (showing a gay kiss) was cut by public broadcaster NET. In Athens, the birthplace of democracy, the reaction of the opposition party was swift and to the point. They released a statement calling the omission “an obvious case of censorship, an extreme act of homophobia and discrimination which unfortunately, after what has been happening recently, we cannot characterize as unprecedented.” If you thought that being on the brink of financial collapse was consuming every human breath in Greece, well you obviously forgot the power of TV.


Full-Season Orders and Cancellations News
It would seem folks at Fox are determined to have a comedy block, even if it's not as successful as they would like it to be. About ten days ago, the network gave back-9 orders to modestly rated new series, The Mindy Project and Ben & Kate. Now, Fox is affirming its faith in The Mindy Project by ordering two more episodes, bringing the season grand total to 24.

The honor of being the first show to be canceled went to CBS's Made in Jersey, which was axed last week after only two episodes. NBC has just followed suit with Animal Practice, but it will remain on the air until Whitney premieres on November 14. As usual in such cases, the two freshman series had steeper than expected drops in ratings after their premieres. By not issuing a back-9 order to Private Practice, ABC has now joined the fray, ending the Shonda Rhimes drama in the middle of its sixth season.


Fan-Favorite News
Entertainment Weekly reports that Game of Thrones's Emilia Clarke will leave the continent of Essos to perform on Broadway. The actress behind the fiery Khaleesi will star as Holly Golightly in a new stage adaptation of Truman Capote's "Breakfast at Tiffany's". Performances on Broadway are slated to start in February 2013 after filming of the third season of the fantasy series is complete. Although the move shows the range of the classically trained actress, it by no means signals the end of her quest for the throne of Westeros. 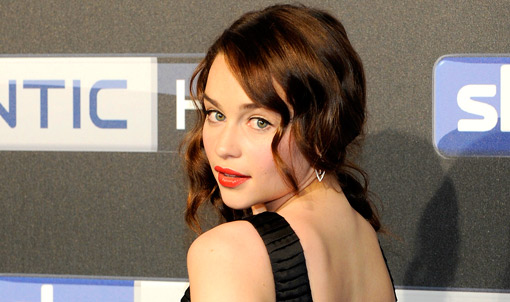 Business News
After a lot of drama in the courtroom, it would appear there might be a "possible settlement" in the trial between AMC, Cablevision (the plaintiffs), and Dish Network (the defendant) when the proceedings resume on Monday October 22. If you are a Dish Networks customer, you are acutely aware of the fact that the dispute is the reason why you still can't watch The Walking Dead on your TV set. If you are not, then you might want to write Dish Network on your list of providers to avoid.

Still, not all is gloomy in the world of satellite TV carriers. DirectTV, which had its own dispute with Viacom in July, has just signed a new retransmission deal with CBS. The deal covers all CBS owned and operated stations including Showtime, CBS Sports Network, and Smithsonian Channel. I wish we could say DirectTV has learned its lesson from the July bickering with Viacom, but we know better, don't we?

The trend to move content to the web continues with the new deal between Viacom and Hulu. The video streaming website will now offer Viacom's Nickelodeon programming as part of its Hulu Plus service. According to the deal, the five recent episodes of the children network's live-action and animated series will be available on Hulu Plus, each appearing online 21 days after the original air date. Similar agreements are already in place with Hulu for Viacom's BET, Comedy Central, MTV, Spike, TV Land, and VH1.