Two Weeks With The Wii U

Nintendo’s entry to the HD era was two weeks ago with the launch of their new Wii U console. Unlike previous console launches with the Xbox 360, Playstation 3, and the original Wii, this actual launch was not really much of a spectacle as people thought. Sure, it is a new Nintendo system, but there was not the same enthusiasm with long lines waiting till midnight to get their console. Nintendo had their own event at their own store at New York City, but most stores at the United States in my experience have been let’s say soft. Personally, the Gamestop I got my Wii U reserve did not have a midnight launch and I waited till their normal store opening with only a handful of other people that pre-ordered it. Since then, the Wii U has been a little easier to find randomly at retailers compared to the Wii in 2006 and the first half of 2007. That shows a bit that consumers aren’t really that hyped for a new console or Nintendo didn’t do a good job of advertising it themselves. With all that said, how is the actual system itself? Its been full of ups and downs, but I’m having a good time with it so far.

Right off the bat when you first initially set up your Wii U, you’ll be prompted to download a big update that includes Nintendo Network, Miiverse, the eShop, and backwards compatibility with the Wii assuming you hooked the system up to the Internet. This update takes a hour to two to download and install, which is unfortunate if you want to hook it up and start playing games right away. Nintendo did acknowledge that and apologize for the big update that should of been ready to go when you take it out of the box. Hopefully that will be the case in later units that will be released in the coming months. The same thing goes for certain launch games like New Super Mario Bros. U and Nintendo Land where you’ll be prompted to download/install a patch before starting up the game(s). Setting up a Nintendo Network ID with your Mii as your avatar is also easy and it was about time Nintendo finally ditched the whole friend codes system, but it will be stuck to the console it was made. In other words, you can not transfer Nintendo Network accounts from one Wii U to another like how Microsoft and Sony handles Xbox Live and Playstation Network accounts. 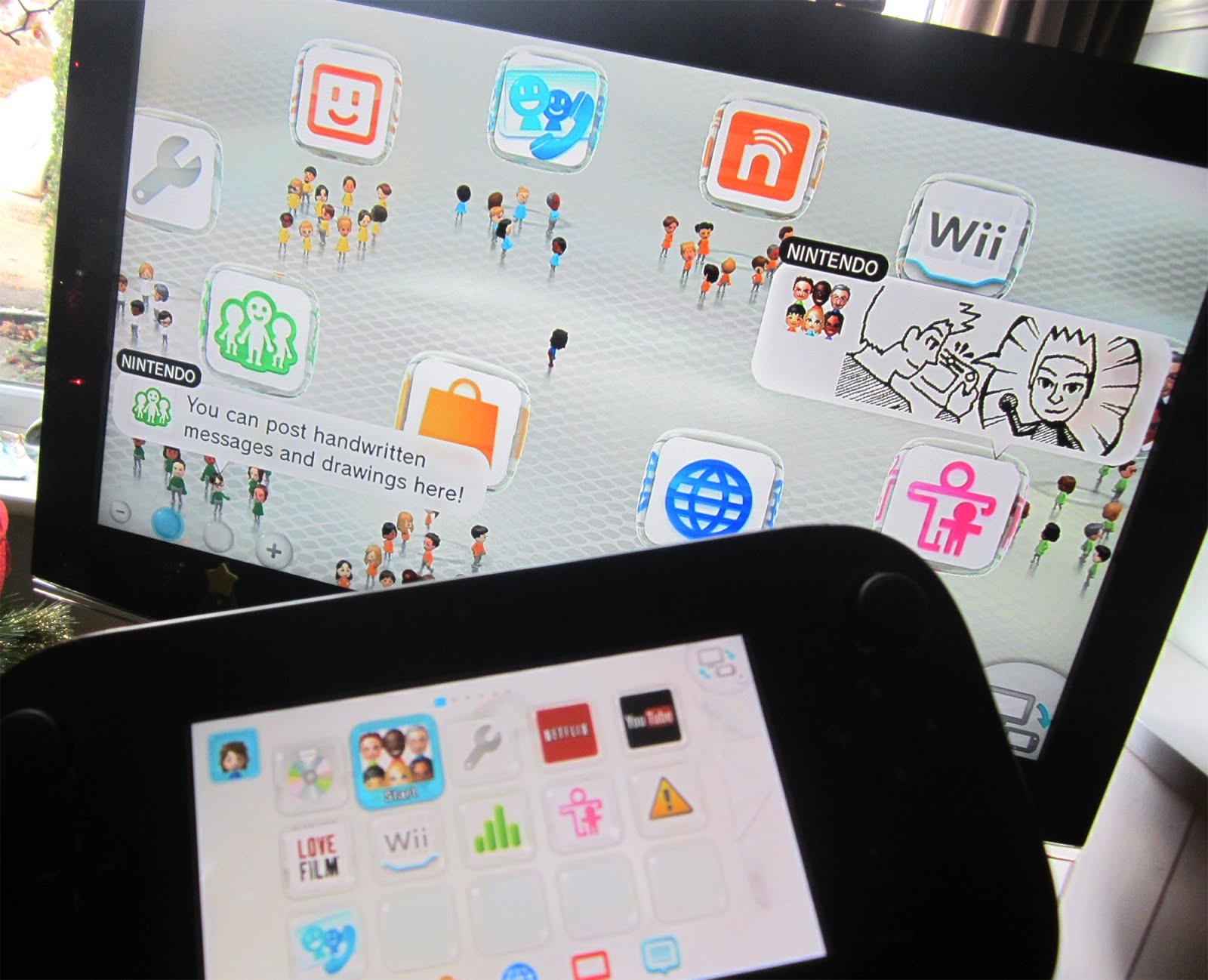 The Wii U dashboard (pictured above) consists of a Mii-like plaza on the TV and a simpler menu version on the gamepad, which I’ll talk more about in a bit. Personally, I rather use the gamepad’s dashboard more to access the games, Netflix, YouTube, Miiverse, and more. One of the major issues with the dashboard so far are the load times to navigate through the menus. Having a load time to access simple things like your friend list via the home button, Miiverse, and even notifications is inexcusable compared to the Playstation 3’s XMB and the Xbox 360’s dashboard. Load times for the eShop, Internet browser, and the upcoming Nintendo TVii next month are a little tolerable since they have to load up more data. You can use the touch functionalities of the gamepad, the stylus it comes with, or its sticks/buttons to navigate through the menus. Backwards compability with the Wii is also handled in a weird way by Nintendo. To play Wii games, you have to access the Wii Menu on the Wii U's dashboard so you load up the old dashboard on the Wii. The old Wii eShop is there with Virtual Console and WiiWare games to buy from original Wii Points, but none of those games have the Wii U gamepad supported, which is disappointing. Nintendo hasn't said much regarding Virtual Console plans for the Wii U yet, but Nintendo just shoving the original Wii menu to the Wii U is a bit lazy.

Speaking of the Wii U gamepad controller, this is the most important aspect of the Wii U Nintendo has been talking about other than finally going HD. It is actually lighter than I thought when playing it. It basically has the same button layout of the PS3 and 360 controllers with triggers, bumpers, clickable analog sticks, and face buttons, but of course with a big touch screen in the middle. It might be a weird layout for first/third-person shooters like Call of Duty: Black Ops 2 because of where the analog sticks are located, but at least there is the $50 Pro Controller to buy if you want a similar experience to the other versions. The touch screen is single touch only and the stylus is used like the DS/3DS handhelds, but multi-touch can be possibly integrated in a Wii U Gamepad Plus type of deal. Also, no games require more than one gamepad yet, but that will likely change once developers have more time working with the console. That is why the gamepad is not sold as a separate controller for now. The graphics on the gamepad’s touch screen look pretty good for what it is with certain games, but they of course look a little better on your bigger HDTV. In a nutshell, the Wii U is a HD version of a DS, which can be both a good and a bad thing. 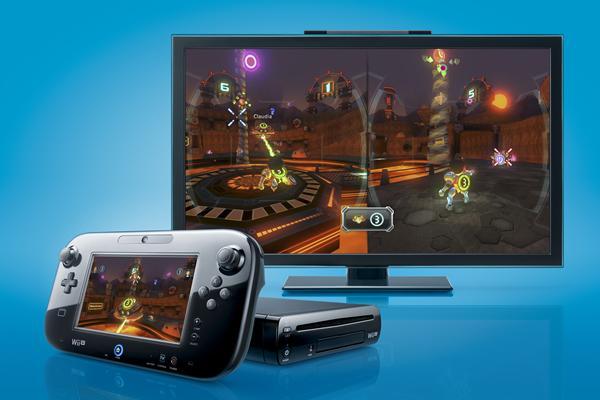 My favorite feature of the Wii U is the Off TV Play. This allows you to play your games on just the gamepad and not the TV. In other words, you can turn off your TV or have something on and just play Mario, Sonic & Sega All-Stars Racing Transformed, and other games that support the feature. The console has to be on of course and the max distance it can signal the gamepad is not that bad assuming you’re not blocked by walls in your house that much. All of this does factor in the gamepad’s battery life as normal, which is at an average of four to five hours before charging it up with its own adapter. The battery life can be a problem for those that like to have marathon gaming sessions, but it hasn’t been an issue to me yet.

Even though Nintendo TVii is not out until sometime next month, the gamepad can also be used as a remote control to change channels and volume on the TV. You just have to set it up on the system settings and see if your TV and receiver supports it, which is the case personally for me with a LG TV and a Verizon FiOS cable box. The major concern I have with the Wii U’s display settings is that it suffers from overscan with certain TVs. That itself is the TV’s fault and not the console’s fault, but hopefully Nintendo notices those complaints from those that have the specific problem in a future update. My solution is to have a setup screen that allows you to fit what you see within your TV’s borders like how some 360/PS3 games do the first time you boot them up. 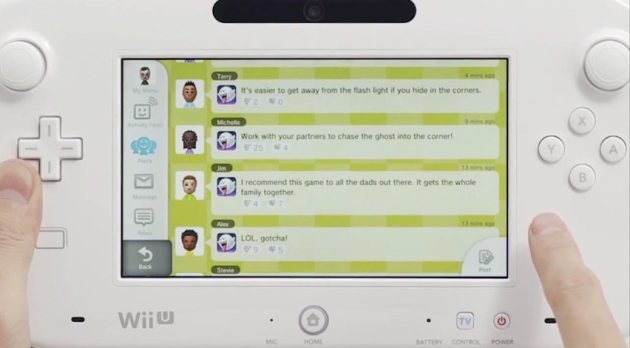 I didn’t expect too much from Miiverse when Nintendo first talked about it, but ever since the Wii U came out, I have been surprisingly impressed with it. Miiverse is basically Nintendo’s own approach to a social network without resorting to Twitter and Facebook. It consists of communities that players with Nintendo Network IDs can share their thoughts of the games they’re playing, ask for help if they’re stuck in a certain level, or draw something pretty on the gamepad’s touch screen. Like most social networks, players can like or “Yeah” their posts and comment on them as well. Being able to draw on the gamepad has been pretty crazy because of how amazing players can become talented artists with these drawings. Nintendo has a system ready to handle game spoilers and inappropriate content for those that think they can get away with it.

The Nintendo eShop so far has been fine with most of the launch games that are out can be purchased digitally for the same price. Some games are $5 to $10 cheaper than retail on the eShop like Tekken Tag Tournament 2: Wii U Edition. Plus, there is the deluxe digital promotion that is a discount on eShop content if you bought the $350 deluxe set with 32 GB of internal space. If you’re planning to buy lots of games digitally, be prepared to have SD cards ready especially once your internal hard drive gets full after just two or three games. Besides the launch games that have been released already, there are downloadable indie games out to buy as well such as Chasing Aurora and Trine 2. There aren’t many of them now, but expect that number to pick up in the coming months. Free apps like YouTube, Netflix, Hulu Plus, and Amazon Instant Video are also available too even though they weren’t out the first day of the Wii U’s launch. 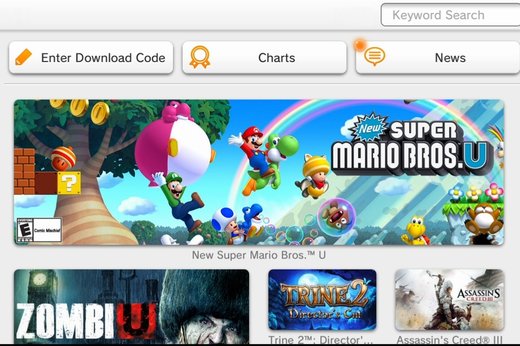 Another concern I have with the Wii U so far how the peripherals are handled. Besides the gamepad, most Wii U games that are out so far still require Wii Remotes, Nunchuks, and Classic Controllers from the original Wii for multiplayer. Like the Wii, be prepared to spend more money than you thought if you want to have full local multiplayer experiences with family and friends. Some games that should have Pro Controller support but don’t like New Super Mario Bros. U, but most of the third-party games out now do support it even though you won’t get the gamepad experience. Even Wii launch day Wiimotes are not supported since the Pluses replaced them at retailers. It feels like a disconnect where one player gets a full blown Wii U gamepad experience while others feel like they’re just playing another Wii game, but some games like Nintendo Land make good uses of both controllers.

Not every console launch goes perfect and that is indeed the case with Nintendo’s Wii U. There are already some neat touches with the system so far with Miiverse and the Off TV Play, but the little issues like overscan on certain TVs, load times navigating through the dashboard’s menus, and others eventually become big ones. The Wii U gamepad is a cool controller with its multiple functions as the potential is there for developers to take full advantage of it in the coming months and years. That potential is not there yet with the current launch lineup, but games such as Nintendo Land and ZombiU do show that the Wii U can be something special. Will Nintendo’s new console be able to replicate the success of the Wii phenomenon six years ago? It is still too early to tell, but all it takes is one killer app. Beyond this initial launch lineup, there are only a handful of games worth watching out for that are already announced for the Wii U and hopefully we don’t have to wait too long for Nintendo to announce the next big wave of games for the system. I’m having a good time with the Wii U despite some issues and it has been worth the $350 purchase so far. How are your experiences with the new console so far? Let us know in the comments below.