"Yes... another remastered collection is coming out soon but with some caveats"
By: Jeffrey Dy | PS3 News - PS4 News | June 4, 2015
It was only a matter of time before an Uncharted remastered collection is gonna be announced and Naughty Dog made it official this morning despite it being leaked on the Playstation iOS app last night. The Nathan Drake Collection is coming out on October 9th only for the Playstation 4 with the first three Uncharted games.

Bluepoint Games are handling these remasters of Drake's Fortune, Among Thieves & Drake's Deception with them being 1080p and 60 fps. They also mentioned photo mode and other changes that will be announced at a later time.
Now here's some caveats from the get go: no multiplayer from the three games will be in this collection. For comparison sakes, The Last of Us Remastered did include it's multiplayer. It is a bummer for some to get more replay value out of these remasters besides the memorable campaigns, but seeing how other highly anticipated remastered collections included their iconic multiplayer, that didn't work so smoothly out of the gate at it's launch.
The only multiplayer this Nathan Drake Collection is getting however is exclusive access to the Uncharted 4: A Thief's End multiplayer beta. No word when that is out yet, but I assume it is not the same day as the collection itself. This has been the way to sell these remastered collections lately (looking at you Halo again) and at least all the games are being included unlike some recently announced remasters. 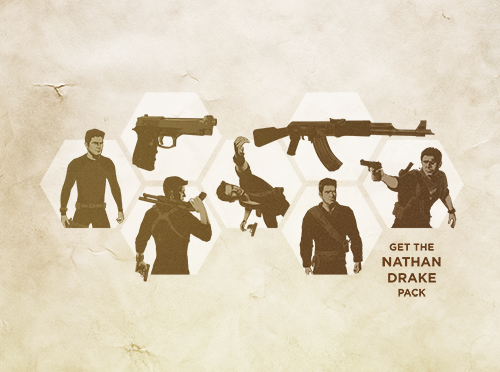 There is even a pre-order bonus for this collection which includes more outfits for Drake as well as the Golden AK-47 and Golden 92FS guns from these games. Digital prepurchasers also get a dynamic theme along with these bonuses.
Uncharted: The Nathan Drake Collection comes out on October 9th for the Playstation 4. I wouldn't mind seeing a PS4 bundle announcement with this at E3 or sometime closer to the holiday season because that would be the time I might finally get one for myself.