The latest episode of Veep, "Hostages," gives audiences a inside look at what goes on in the world of the Vice President during a hostage crisis. The beginning of the episode also shows audiences that Sue, Selina's assistant, has a hearing to attend, so someone will be temporarily taking over her position (this becomes one of the main plot points of the episode). As soon as Cliff (Sue’s replacement) gets in to the office, he makes a nervous joke using his own name, to which Sue replies, "Don't make jokes Cliff. I don't have a sense of humor and neither should you." Even though Sue claims she has no sense of humor, her serious personality provides a good amount of sarcasm on the show. One of the things about this show that adds to the entertainment value is the fact that while each of the characters are working in high positions under the supervision of the Vice President, and, in Jonah's case, under the President, they each provide a great amount of humor, and the supporting cast is a lot of fun.

The hostage situation is pressing and of utmost importance throughout the episode. Selina visits Marines who have returned from Iraq, intending to do her duty as a leader, i.e. congratulating and thanking them for their service. This is a great comedic moment; as she is meeting with the Marines, Gary and Dan are whispering what she is supposed to be saying to them since she has been too busy to actually learn what she is supposed to be doing when she deals with people in this type of situation. This is a part of Selina's personality that is a bit frightening to think about: it's scary to think about a real VP being this uneducated when it comes to the important issues going on in the world. However, it does make for good comedic moments on this show. In the important scene that follows, she and the Secretary of Defense meet, and he urges her to try firing a gun. Selina freaks out and doesn’t know what to do.  She discusses it with Mike and Dan, and Mike urges her not to do it, explaining that it could backfire quite literally and become a danger to her. She ends up shooting the gun, but fortunately no one is hurt, and she even has a bit of fun.

Later, we find out that Cliff, who has replaced Sue, is doing terribly on a number of levels, as he feels heat from Selina and her staff. This switch makes for a troubling turn of events; other staff members continue to tease him, and he later double books the Vice President's hostage video call with the White House staff at the same time as the swearing in of the new Senators. Selina has to rush from one event to another. She tells Cliff to make sure that there is nothing that could interfere with a conference with the White House staff, and neglects to notice that she is supposed to attend the swearing in of new Senators. She refers to Cliff as a grinning ewok because of the way he looked when she returned to the office and would not stop smiling.

After the stressful swearing in of the Senators, and the horrible small talk that Selina has to make with them, she is forced to rush to the video conference in order to work on the retrieval of the hostages. Soon after, she arrives in a room with Jonah, Dan, and Amy in order to talk with the office of the White House in order to negotiate the release and safety of the hostages. It is never really clear where the hostages were taken or who has them, which seemed to be a bit of a plot hole in the episode, but the VP and her staff are able to get them to safety, and everyone breaks out in celebration afterwards. It seems that it is rather easy to get the hostages released, which feels a bit unrealistic. One of the hostages does get injured at the end, causing Selina to feel responsible, and she suggests that they invite him to the White House. 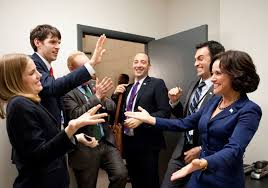 In addition to the Star Wars comment made by Selina in reference to Cliff, humor deftly infused with pop culture references is incorporated at a constant pace throughout the show. Mike makes a reference to American Beauty when Jonah tells him to think of him as a cheerleader, and the Secretary of Defense has compared Selina to Lara Croft, an icon in the video game industry. This is an aspect of the show that I really enjoy, because while other people might not understand these jokes at all, as a pop culture nerd who appreciates all things entertainment, it is great to have current references incorporated into the show. Julia Louis-Dreyfus displays her acting talent throughout this episode and is a treat to watch. Her ferocious attitude throughout this episode, and on the show in general, is even a bit reminiscent of Ari Gold from Entourage, a character whom viewers came to love.