There’s a lot to like about the fourth season* of Veronica Mars, which will drop on Hulu Friday, July 26. If you are one of the show’s many Marshmallows, thrilled at the chance to spend some more time with Veronica (Kristen Bell), Keith (Enrico Colantoni), and Logan (Jason Dohring), you’ll certainly be happy with season four (well, until the sure to be controversial ending, which I'll get to in a bit). If you’re looking for a bit more than additional time with some favorite friends from yesteryear, well, then you might find yourself feeling a bit disappointed at the end of the eight-episode season.

*For the uninitiated, Veronica Mars originally ran from 2004-2007 on UPN/The CW and made it to the big screen with a Kickstarter-funded film in 2014, making this latest incarnation of the series on Hulu the show’s fourth season. And, if that’s all news to you, I would suggest jumping in from season one, as Veronica Mars was, and remains, a really great binge.

The major season mystery appears rather straight forward on its face: A serial bomber is terrorizing the Spring Breakers who haunt Neptune. The first bomb kills the nephew of a Mexican drug kingpin (resulting in two thugs being sent up north to find and kill the bomber) and injures the brother of California’s first Muslim US Congressman (which sets up a twisty plot that proves pretty unnecessary and is one of the season’s least successful elements). This all plays out against the backdrop of Neptune’s small local business owners (including new addition Kirby Howell-Baptiste – Bell’s The Good Place co-star – as a local bar owner) and the city's rich business tycoons (headed by Richard “Big Dick” Casablancas Sr., played once again by David Starzyk, and his fellow ex-con henchman Clyde, played by the excellent JK Simmons) clashing over whether or not Neptune should remain as it is or become a haven for the rich and careless (returning to a common clash of the original series, the push and pull between the “haves” and the “have nots”). If that already sounds like more than enough to fill eight hour-long episodes, well, I haven’t even touched on the character driven side of the story, as Veronica attempts to solve the case while believing that if she ignores the various personal issues in her life, they will simply go away. (Spoiler: They will not, and Veronica will, eventually, need to address them . . . something that gets relegated to the final two episodes of the season in a wholly unsatisfying conclusion.)

If you’re exhausted just reading that run-down (and there are even more subplots I didn’t touch on, like the strange true crime group, led by the local pizza delivery man, who is relishing in his online fame from “surviving” the first bombing with minor cuts – played with the perfect blend of nerdiness and weirdness by Patton Oswalt – who tries to help Veronica solve her case), let me tell you it’s just as exhausting to watch at times. I wish the show had excised a couple plots from the mix (the Mexican cartel connection might have been a fun way to link Weevil – played again by Francis Capra – to the main story, but takes far too much screen time), and opted to focus on a less sprawling tale.

When Veronica Mars is at its best, the series manages to blend the personal drama in Veronica’s life with the professional mystery she’s attempting to solve with plenty of noir overtones. Too much of either and the show just doesn’t work quite right. In season four, the combination is tilted too far into the professional, spending too much time on the case and not enough time delving into who Veronica, Logan, and Keith have become in the time since we last saw them. We learn that Logan is now working with NCIS (which causes him to be off on classified missions with regularity, leaving Veronica alone with their dog – something she claims she’s fine with, but we can all sense there’s something fundamentally amiss with their relationship – despite the number of times the show presents us with a scantily clad Logan to take our collective minds off the issue), Keith seems to be suffering from some form of early onset dementia (Colantoni is, for my money, the MVP of season four, slipping back into the role effortlessly and bringing layered work to a role that could easily be rote for him at this point), and Veronica is content to pretend nothing is wrong with anyone and everything is fine (not exactly a shocking choice for an older Millennial, and Bell sells it, but this Veronica spends the bulk of the season completely divorced from her emotional center, which makes it difficult to really get a read on the character and empathize with her, even with the occasional voice over – it’s a clear choice of the creative team, but not one that works). Emotional distance is a hallmark of noir, but we know Veronica feels things incredibly deeply, and the character seems strangely cold throughout the season as a result of this choice. 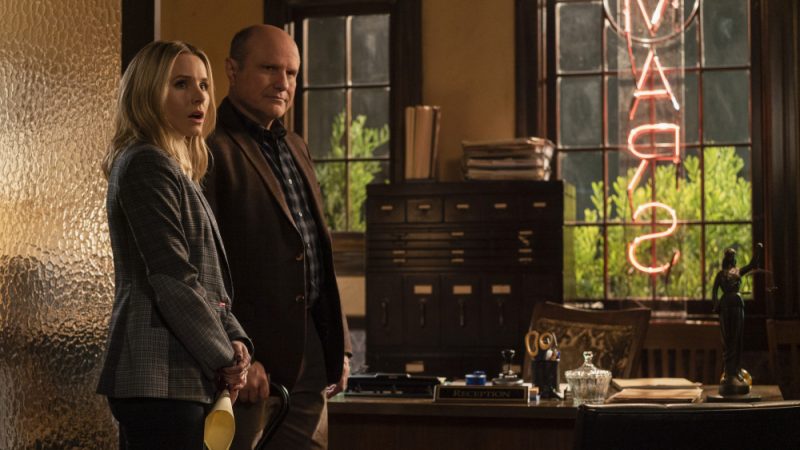 I was a late convert to Veronica Mars (as in I binged the entire series a few weeks before the film came out), but I was still excited to spend some additional time with the gang in Neptune. I wanted to see how the characters I loved had grown and changed over the past few years. Hell, I wanted to spend more than a handful of scenes with characters like Wallace and Weevil (both of whom appear several times in the season, but are both tragically under-used while newer, less interesting characters get tons of screen time). Instead, I got a complex mystery with enough subplots to confuse a real investigator, and an ending that was both rushed and unsatisfying from a character perspective – even after having the whole thing spoiled by the show’s PR team in a poorly constructed email.* I can’t get into specifics here without spoiling things (and I certainly won’t do that), but suffice it to say, I cannot imagine fans will be thrilled with the way the show ends the season – both from a pacing and narrative stand point. And I’m not entirely sure the series could continue into a fifth season following this particularly difficult to stomach twist (which genuinely feels like it’s meant to shock fans – and several characters – out of complacency rather than provide a satisfying ending to the season).

*For those who follow me or any other TV critic on Twitter, you likely saw a minor freak out on the platform last week after the show’s PR team sent out an email to all critics reminding us not to post reviews before a certain date and to refrain from revealing any major spoilers in our reviews – before listing two massive, game-changing spoilers in the email, thereby spoiling nearly every critic.

So, season four of Veronica Mars is a mixed bag. It’s at its best when it relies on its best asset: its characters. The moments of Veronica and Keith riffing in their office justify the existence of the entire season (seriously, I could watch Bell and Colantoni share the screen all day – their chemistry is just so great), and the interplay between Colantoni and JK Simmons is utterly delightful and fun, but there’s enough weighing down the episodes (and the disappointing ending definitely adds to that weight) that it likely won’t have the same staying power the earlier seasons of the series have had. I can’t imagine re-watching the season again, while I would certainly give seasons one or two another look on a rainy day. There’s a better story within the season than what we get, but I’m ultimately happy we got one more case with Mars Investigations. Even if it was a bumpy road to reach the end.