What is the Future for Star Wars Games?

Last week, Disney dropped the bombshell that they bought LucasFilm for about $4 billion. They now own the Star Wars IP and everything else Lucasfilm-related. In the world of movies, they already announced Star Wars Episode VII for a 2015 release and more episodes in the future. While Disney already set plans for more Star Wars movies, what about the world of video games? Now that they own LucasArts, what is next for Star Wars games?

LucasArts currently has two games in the works, which are a rumored Xbox Live Arcade game called Star Wars: First Assault and Star Wars 1313, one of the most buzzed games at this year’s E3 because it looks like a preview of the next generation of consoles. Once the Disney deal was official, LucasArts did state that both of those games will still come out on schedule and excited to see what Disney can do. It is nice that Star Wars 1313 will still be released as planned, but with Disney’s marketing and resourcing efforts, the highly anticipated game can get the push it needs to be a much bigger hit for both gamers and Star Wars fans. 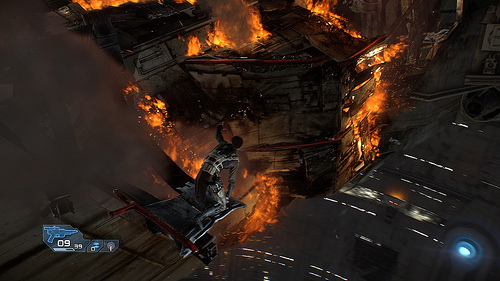 Other than those two LucasArts games, Disney has said they want to be more focused on making mobile and social games based on the Star Wars franchise. Rovio’s Angry Birds Star Wars, which comes out this week on a variety of mobile platforms, is a start and there is no word from Rovio on how the Disney deal affects them with working on the Star Wars IP in terms of potentially making more expansions. However, Disney mentioned that they will still have room for console games like Star Wars 1313, but don’t expect them to release that much games if they are focusing more on social/mobile games.

The Star Wars franchise in games has not had a good track record in the past few years with The Force Unleashed series not being a hit with critics as LucasArts hoped. The company’s staff was dwindled after Force Unleashed II came out. The Lego Star Wars games have decently sold, especially for the intended audience of children, but that was not the case for critics either. The big disappointment with the Star Wars IP in recent memory is EA and BioWare’s The Old Republic MMO. Both of those companies declined to comment on how Disney’s purchase of LucasFilm affects the future of that game.


Beyond Star Wars 1313 and Angry Birds Star Wars, the future of Star Wars games is up in the air now that Disney owns the IP. LucasArts does become a part of Disney Interactive Games, but it is a possibility that Disney can just lay off the remains of LucasArts and let their own gaming studios work on Star Wars games, which will be unfortunate. With new movies coming in the next few years, games based on those are likely in the works. I am a little worried that Disney will focus too much on making games based on the new trilogy while there is still so much to tell with other Star Wars storylines. Assuming Marvel is still mostly unchanged and doing well since being bought by Disney, the same can be the case for Star Wars too. We will see as Disney’s big acquisition could be the beginning of a new era for not just Star Wars games, but the whole franchise if the new movies are successful.