We are currently in the midst of one of the most dramatic Joker stories to be told in Scott Snyder’s “Death of the Family” Batman arc.  While many small details of the Bat-history have been changed (like Tim Drake always being called Red Robin), it remains true that no one knows Batman better than the Joker.  We won’t see the conclusion of the story for another month or two, but it’s already turning out to be an amazing examination of their relationship.

Who can forget the incredible performance of Heath Ledger as Joker in the movies?  His Joker was one of the most depraved versions of Joker to appear.  His only goal appeared to be chaos.  Yet he retained his ability to figure out how to push everyone’s buttons.  In that universe he is responsible for creating Two Face by pushing Batman to save him.  His reign of terror is even scarier than that of Scarecrow because Joker doesn’t make you see your fears, he knows them and manipulates you based on them.

But I believe the best Joker story is “Mad Love” which first appeared in the one-shot The Batman Adventures: Mad Love, but which I first saw on the animated series The New Batman Adventures episode 21.  What makes this story so great is that it explores Batman and Joker’s relationship by showing us how Harley misunderstands that relationship.  In the story Harley attempts to get Joker to spend some time with her - after all, they are supposedly dating.  But all Joker wants to do is work on a plan to capture Batman.  Despite her best attempts to use her femininity to get his attention, he punctures her dignity by pushing her off his desk and forcing her out of the hideout.

Harley sees Batman as a rival for the Joker’s affections and attention.  So she sets out to kill Batman as a present to the Joker and to finally have him all to herself.  And, wouldn’t you know it, she actually succeeds.  As an issue of the New 52 Suicide Squad had her remind us - everyone thinks of her as a ditz, but she WAS a psychologist before she fell for Joker.

Harley brings Joker over to show him what she’s done, expecting praise.  When Joker asked what’s going on she explains that she has Batman hovering over a tank of man-eating fish who she has rigged to be frowning so that from Batman’s point of view they’re smiling.  Joker flies into a rage, showing a surprising amount of domestic violence for a kid’s TV show, yelling, "If you have to explain a joke, there is no joke!"  Harley is once again hurt, but even more badly than before.  We then have the absurd, but intensely rewarding image of Joker releasing Batman and apologizing for his being caught by an amatuer.  When he realizes maybe he should be grateful to Harley and kill Batman, it’s too late and Batman escapes and Joker is captured. 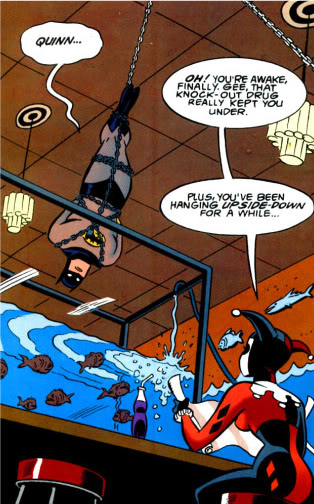 This episode served better than any other Batman and Joker story I’ve ever seen to explain their dynamic.  Joker enjoys the chase.  He doesn’t truly care to kill Batman.  He’s a spoiled sport when it appears someone else not only succeeded, but will remove Batman from his life.  It’s why he has to, in his deranged mind, apologize.  It’s a game between the two of them and Harley has sullied it.  It also succeeds in showing that he tolerates having Harley around because she helped him get out at one point and she’s a good fall guy when things get rough, but he has no feelings for her - Batman consumes his entire life.