Last week I mentioned how much I love alternate universe fiction. Unfortunately, Astonishing X-Men's “Exalted” story arc has left me disappointed. Given how important alternate universes have been to X-Men storylines (Age of Apocalypse, Bishop's timeline, and many others) I was left wanting more. X-Factor's current story arc “They Keep Killing Madrox” is an example of a well-told alternate universe story. Considering that X-Factor is just barely part of the X-Men universe, it may not get as epic as the classic X-Men stories or even have an impact outside its book. That doesn't stop Peter David from putting together a great story.

X-Factor is one of the most underrated books that Marvel is putting out right now. While I haven't enjoyed every issue I've read since I got into the book last summer, it is one of the most consistent books out there and I have found myself liking it more and more with each issue. If you found the idea behind the tv show Angel (the Buffy spin-off) interesting (even if you weren't a fan of the execution), you'll probably enjoy X-Factor. The team run a private investigation firm in old Mutant Town. Since most of the mutants are on the West Coast now, they have a huge range of clients – from mutants to super heroes to regular humans. Many of the cases tend to deal with the occult, which is what made me draw comparisons to Angel. If there's one weakness to the book, it's that it's not easy to jump in without going back and reading the trades. The team has a huge history of character interactions and sometimes it can be a little hard to follow why characters hate each other. I've been able to do it, but I can sense that I'd really be enjoying this story arc a lot more if I better understood the back-stories to these characters.

“They Keep Killing Madrox”, in its third installment this week, is about Jamie Madrox (Multiple Man) ending up traveling through different dimensions Quantum Leap style. Unlike Quantum Leap, however, he always ends up in the Jamie Madrox of that dimension and instead of being freed of his current avatar when he accomplishes a good deed, he's freed when he dies. 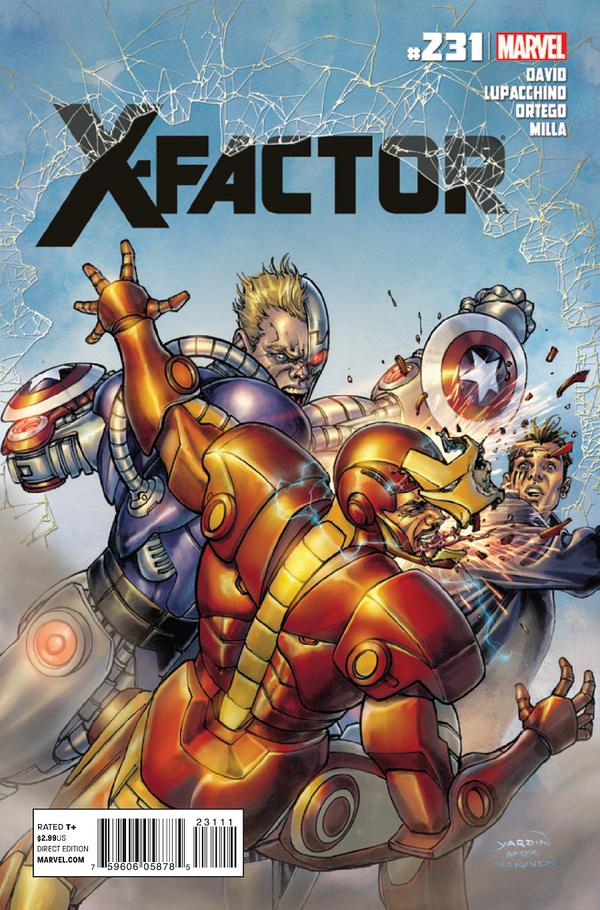 This issue has him deposited in an alternate universe where Iron Man duplicate robots take the place of Sentinels, out to destroy mutants. They discover Jamie Madrox, but some built-in sensors allow them to see that he's not the Madrox of their universe. They take him to Tony Stark where we get the first reveal of this issue – this is a world where Scarlett Witch uttered “no more humans.” explaining why the remaining humans are out to exterminate the mutants. The rest of the issue is a battle between Tony Stark and some others who want Jamie Madrox for their own purposes.

I know that it all has to do with the upcoming Avengers vs X-Men event, but it's been pretty interesting to see Wanda and various versions of M-Day appear all over the Marvel universe so many years after it happened. For example, the characters of the soon-to-be-launched Age of Apocalypse book tried to use clones of Scarlett Witch to set of their own M-Day. But its appearance in X-Factor is a great example of what I love about what Peter David is doing with this book. Rather than rehash the same old lack of mutants, he flips it on his head, giving us a world where she reduced the human population.

While I tend to get bored in books that have too much action, the action is well choreographed in the issue and does a good job portraying the dynamics of the movements. Peter also does a great job balancing the drama with the humor in this book, always a tough line to toe. There's clearly some pretty heavy stuff going on in the background. And all of the universes Madrox ends up have macabre deaths both for the Madrox he's replacing and when he travels to the next universe. On the other hand, Jamie's inner monologue is such a treat to read.

While this isn't the best jumping on point in the middle of a story arc, you should strongly consider adding X-Factor to your weekly pull list.