"More Than a Good Feeling"
By: Jeffrey Dy | Wii-U Reviews | October 21, 2015
Ever since Yoshi Island: Super Mario World 2, Nintendo's green dinosaur hasn't had a good track record with his traditional starring appearances. Yoshi's Story on the N64 was disappointing and also the game that made me get glasses. Yoshi's Island DS and Yoshi's New Island tried to bring back the good old days of the original, but couldn't replicate what made it special. Now we have Good Feel, the folks behind Kirby's Epic Yarn, tackling the traditional Yoshi series with Yoshi's Woolly World. After seeing how they approached Kirby, them and Yoshi are like a perfect match for Nintendo. The expectations were set high for Woolly World and it does indeed live up to them. 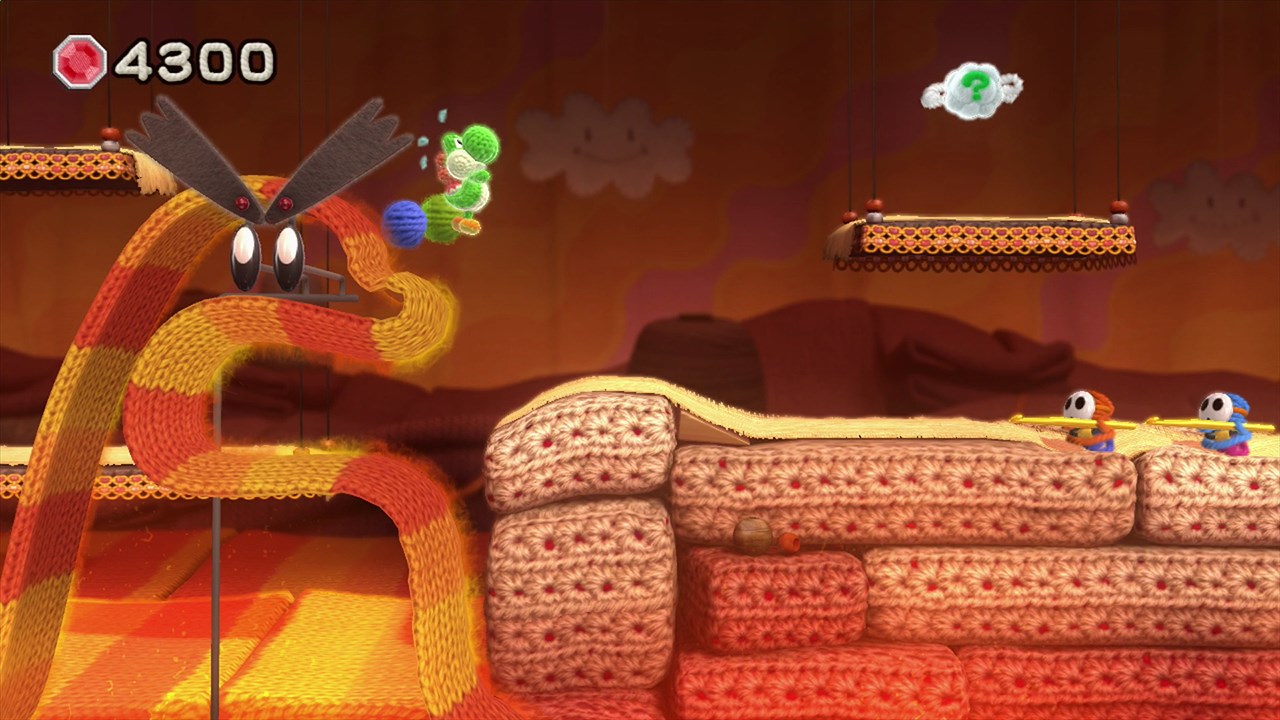 The story is standard for the Yoshi series minus baby Mario this time around (thank goodness). Kamek dismantles all the Yarn Yoshis and it's up to the lone green Yoshi to save them all. Also not surprising are the familiar enemies and bosses you encounter if you're familiar with the traditional Yoshi games. Take a good guess who's the last boss in Woolly World. The game doesn't throw any big twists at players as you expect from Nintendo games, but it's the execution and Good Feel's signature charm that makes Yoshi's Woolly World a joy to play.
Good Feel's take is indeed "Yoshi's Epic Yarn" implementing the signature Yoshi mechanics with a yarn twist and coming up with cleverly designed levels. Yarn balls replace eggs and the aiming works similar to past games and good thing the developers kept it traditional than trying to force gyro or other forms of motion controls. Yoshi's tongue still works as what you expect eating enemies and opening up hidden areas. He also has his flutter jump and ground pound as well. Yoshi's controls on either the Gamepad, Pro Controller and the Wiimote Plus do the feel the best since Yoshi's Island while past games struggled to replicate it.

While you feel you're having a chill time playing the game as the developers intend, the stress does come in with collecting everything in the levels from the flowers, Yarn Yoshi pieces, stamps replacing the red coins while finishing with full health, another staple of Yoshi's Island along with the bonus stages if you get a flower at the end of a level. Being short one or two of either anything I just mentioned in your first run does suck, but fortunately that's where the replay value comes in where you can find what you missed. There's also secret levels that remind me of Super Mario Maker's more interesting levels to unlock after collecting all of the flowers in a world. In addition to getting the collectables, a boss rush mode is unlocked after beating the game where the bosses are faster. The main game does take a few hours to beat if you're playing on your regular pace, but definitely longer if you're gonna 100% everything.
Woolly World's level design is also where Good Feel's signature charm fits well as there are lots of clever ideas. Sure, the world themes are standard Mario fare from your forests, desert and ice worlds, but the levels in them nail the yarn aesthetic the developers are going for. Nearly every level has it's own gimmick and it rarely feels like you're doing the same gimmick in another level. Curtain clinging, bubbles (as pictured above), and the ghost houses are some of the examples that stood out for me. I even noticed nods to Donkey Kong Country: Tropical Freeze such as one of the curtain autoscrollers and even one of the boss battles. Poochy levels and transforming sections where Yoshi changes to a plane, mermaid, driller and even a giant version of himself are also fun too mixing up the action.

The main game also can be played in it's entirety cooperatively with another player. You can eat the second Yoshi and throw him into a hard to reach section as an example. Just like the console New Super Mario Bros. games however, things can be too chaotic even for two players to handle along with messing each other up. Also similar to those games is an easier difficulty called Mellow Mode where Yoshi drinks a Red Bull and gets wings (okay not the Red Bull part but you know what I mean) along with taking less damage from enemies. Power badges that require spending gems are also special abilities to make things easier for Yoshi from not falling in a bottomless pit, more health, not taking damage from fire or lava, and a hidden item indicator. With all of that including no traditional lives, Yoshi's Woolly World seems like not a challenging game, but the difficulty does pick up in the later worlds and secret levels where there's no checkpoints.
Woolly World's amiibo support works mostly similar to Super Mario Maker where the Super Smash Bros. and Splatoon lines gives you more Yarn Yoshis to play as. Let's just say it took almost a hour for me just to unlock all of these by activating them on the Gamepad. Not supported however are the Pokemon ones due to odd licensing issues with The Pokemon Company. The new Yarn Yoshi (pink, blue and green) amiibos do offer an unique twist to the normal gameplay where you have another Yoshi to control (but not like co-op). Think of it as getting the second ship in Galaga. It would be cool if more of the unlockable Yarn Yoshis are actual amiibos too, but that's just gonna hurt my wallet even more with all the amiibo collecting I'm still doing.

Kirby's Epic Yarn was one of the best looking games of the Wii because of it's yarn aesthetic and the same can be said for Yoshi's Woolly World on the Wii U. It simply looks cute and charming from top to bottom especially seeing the familiar Yoshi enemies in their yarn forms and how cleverly designed the backgrounds are. The framerate surprisingly hitches up in the later worlds especially where there's too much going on the screen, but other than that the rest of the game does run great at the Nintendo staple 60 fps. The soundtrack is also adorably charming going for the chill vibe you want from a yarn-themed game.
Mario's riding buddy deserves that true successor to his original starring debut and Yoshi's Woolly World is indeed that. Good Feel working on a Yoshi game after the success of Kirby's Epic Yarn was definitely match made in heaven from executing the signature formula right along with designing a good amount of cleverly creative levels. Of course this type of platformer doesn't seem as challenging, but don't let the yarn aesthetic underestimate you as the difficulty does kick in around the later worlds and also collecting everything as well. Those expecting a entirely different take on Yoshi will be a bit disappointed and co-op is a bit chaotic additionally. With so many other challenging platformers out there on the Wii U, Yoshi's Woolly World is a relaxing change of pace of fans of the genre.
Rating
8.0
Pros