"Three games that define Summer 2015"
By: Jeffrey Dy | PC Features - PS4 Features - Wii-U Features - Xbox One Features | August 3, 2015
The summertime in the gaming world is usually a time where not many games come out as publishers and developers prepare for the holiday season. It's also a time for gamers to catch up on games they missed due to the lack of new releases. However, this summer to me has been arguably the best summer for gaming in a long time. From great and long blockbusters such as Batman: Arkham Knight & The Witcher III: Wild Hunt, players have been surprisingly more busy playing newer games in the summertime. Add along some indie games and this summer has been packed, but three games to me stand out as perfect games for the current season even playing them for little bursts every day.

Splatoon
Nintendo's big game for the season has been a huge success for them even with the lack of content at launch. The kid/squid meme is one thing, but the consistent schedule of new schedules and maps the past two months has been what keeps me playing every week as our own Edward stated in a recent piece. Splatoon has been quite the clever shooter covering the most area with ink in Turf War, taking over a territory Domination style in Splat Zones and moving a tower to it's goal in Tower Control. Even if you haven't been playing since launch, the big online update this week will likely reinvigorate players' interest and motivations with squad battles and the level cap being increased.
Another reason why Splatoon has been my most played game of the summer is the grinding to level up clothing and trying out the new weapons to determine what fits my playstyle. The brushes have been interesting additions, but the minigun and bucket definitely spice things up in terms of different weapons. While some of the new weapons have been useful in the various modes, I still go back to my good old faithful Aerospray and Krak-On roller despite their nerfs. The theory crafting with strategies players and teams come up with have been what keeps me and many others thinking about the game when I'm not playing it. Splatoon is the game that keeps my Wii U from collecting dust (well besides Smash) this season and with Super Mario Maker out next month, Nintendo could likely have my two favorite games of the year.

Rocket League
I never thought I would love a game where you play soccer with cars, but Psyonix's Rocket League has been the breakout hit of the year for the Playstation 4 and PC. Sure, it had a shaky start when the final version launched last month for both systems due to the online servers getting hammered and also the influx of PS4 players playing it for free thanks to Playstation Plus (last day it's free on PS4 by the way folks!). The issues were resolved days later and online games have been a blast whether against random players, cross platform play or serious competitive teams playing it as an e-sport. The Twitch stream numbers have been big, being consistently in the top ten games list alongside League of Legends and others. All that said, there's just something special about punching in the ball into the goal by a rocket fueled car.
Rocket League has that "one more game" addiction whenever you play whether you're on a hot streak or wanting that salty runback after an intense match that to overtime. It feels great for all skill levels, but also has the hard to master mentality in terms of lining up your shots perfectly, flying around for the aerial, getting that epic save and coordinating as a team. Even the unlock system is friendly to all players by just playing matches from antennas of various games like Unreal and Blacklight Retribution, flower rocket boosts and even Sweet Tooth's signature van from Twisted Metal. Coming out at the perfect time and getting the shine it deserves. Rocket League is here to stay for a while for many of us. 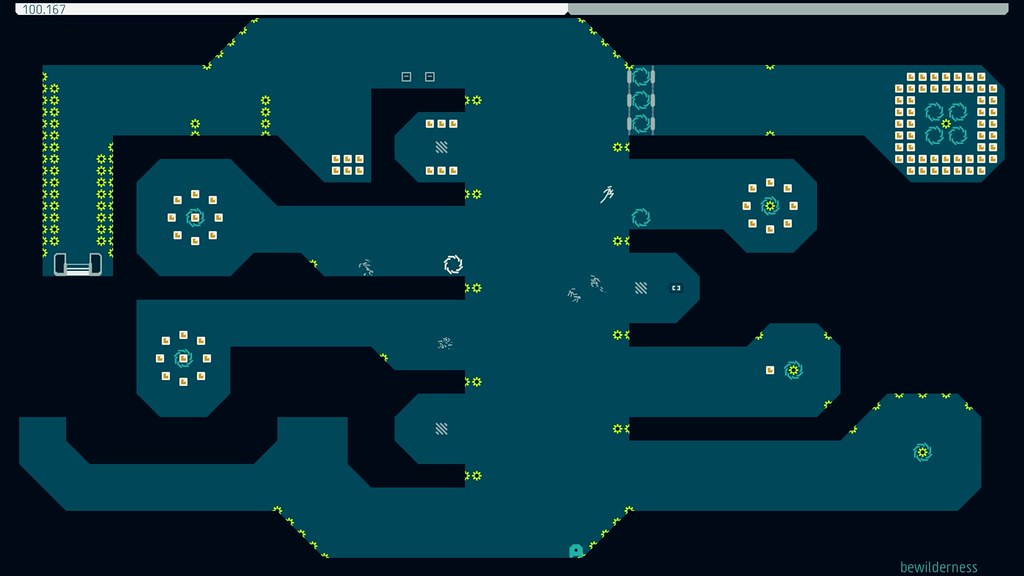 N++
Just came out last week on Playstation 4, N++ is the long awaited sequel to N+ on Xbox Live Arcade, which I spent hours and hours playing. N++ is just more of the same N precision platforming tenfold with thousands of levels Metanet Software made, but the endless amount of created levels players make. For me, it's a great game just to chill through playing despite the challenge the series is known for. The absurd amount of content alone will keep gamers like me busy for weeks and months along with playing co-op levels with another person.
Other than just trying to beat the levels themselves, the thirst to collect all the gold is the real challenge fueling my obsession with collectables. They can be replayed for faster times on the leaderboards and deathless attempts because there are trophies where you die thousands of times. The unlockable visual styles are also a nice touch if you're bored of seeing certain colors all the time. There's some hits and misses with them though. The user created levels are a completely different beast including mind blowing levels that just play themselves without needing controller inputs. Just like the games I previously mentioned, N++ is awesome to play for long stretches and even short bursts playing episode by episode.
These three games alone make a case for the best summer for gaming, but are there other years that stand up to 2015? Let us know in the comments below.