Tales From The Borderlands: Episode 3 Review 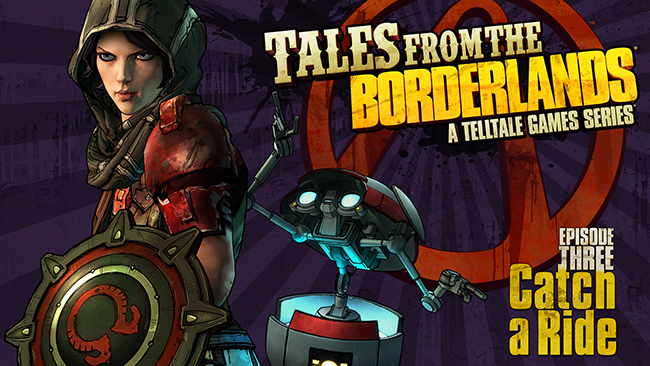 The last episode of Tales From The Borderlands ends on a big decision. Rhys has to make a call. Who does he trust to help him escape? Do you trust Handsome Jack, a weird holographic ghost in your mind. Or do you trust Fiona, a woman who you just met who also happens to be a con artist and even tried to con you earlier in Episode 1. I chose Fiona and then I waited. For almost three months. Like the last episode, the wait was ridiculous and made it hard to remember what even happened last time.
Luckily, Episode 3 “Catch a Ride” is worth the wait. In fact, this might be my favorite episode of any Telltale Game ever. The mix of humor, action, drama and genuinely emotional moments was perfect and I left this episode excited to play the next episode.
After a slightly dull opening scene involving turrets and sneaking, Episode 3 of Tales From The Borderlands kicks it into high gear and quickly starts asking you to make tough choices. Choices that lead to characters dying or being captured. In fact this whole episode is filled with some of the toughest choices of the series yet. 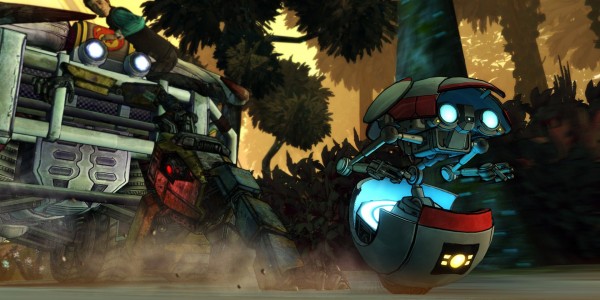 After escaping the mess at the end of Episode 2 you now have the Gortys, which is a device that Atlas created to find Vaults. But this is no boring computer. Instead, this is a cute and hilarious robot who I immediately fell in love with. Almost instantly after activating this cute little robot, she began to interact with Loader Bot and these two have some of the best moments in the episode.
In fact their first conversation had me laughing. Gortys asks Loader Bot how is his day going. Loader Bot responds in his monotone robot voice “It’s been a mixed bag.” That's so good. At one point Rhys and Handsome Jack are having an argument and Loader Bot and Gortys are watching. Gortys asks “Why is he talking to himself? Is he ok?” And Loader Bot responds in his dry robotic voice “He has some things he’s working out.” Those two are the best.
Like the addition of Handsome Jack in the last episode, this episode’s addition of Gortys helps keep the humor fresh and unexpected. Gortys is naive and super cute and her bond with Loader Bot is adorable. 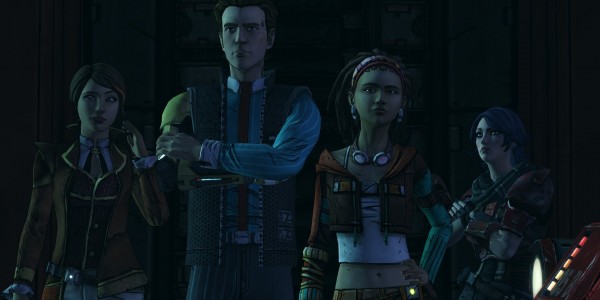 So with the help of the adorable Gortys are ragtag group of misfits sets off to find an upgrade piece for Gortys. Once she has been upgraded she can track down The Vault of The Traveler. But another new character is on their trail and also wants Gortys. This new character is the leader of the bandits, Valory. Valory doesn’t have a ton time in the episode, but the end of this episode is a low point and she is directly to blame.
The bulk of Episode 3 takes place in a strange arctic Atlas facility. This facility is filled with weird plants and dangerous glowing jelly fish creatures. Our group needs to shut down the turrets to get access to the Gortys upgrade piece. And they don’t have a lot of time.Valory is after them. Exploring the facility involved a lot of QTEs and scanning. Which isn’t the most exciting thing in the world. But the story and characters are strong enough that I didn’t mind bashing the Y button for 20 seconds. 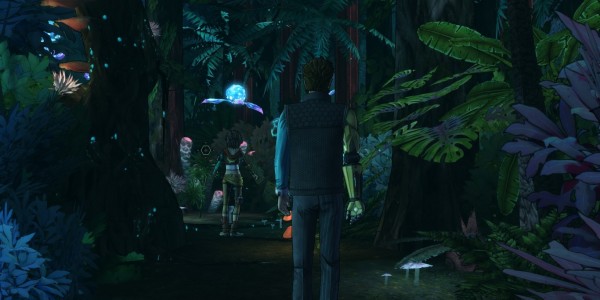 There wasn’t a huge amount of puzzle solving in this episode. Granted, most Telltale Game episodes have cut back greatly on the amount of puzzles. But this episode in particular felt almost entirely focused on story, action and humor. I didn’t mind. Puzzles can be fun, but usually in adventure games they are just a barrier to the next fun piece of story or the next great joke. So not having to worry about solving some obtuse puzzle was nice and allowed the episode to flow really well.
Also 2 more characters from the past Borderlands games show up and they are not quite on your side. Actually, they are straight up trying to stop you.
Finally, this is a Telltale Game so expect lots of framerate dips, animation hiccups, weird audio issues, rough load times and freezing. This episode is filled with these issues, especially towards the end of the episode when the action gets fast and busy. There were moments where the game would hang up for 4-5 seconds after a QTE or a dialogue choice. And I didn’t have this happen to me, but many are still having problems where their saves vanishing. It is really frustrating that Telltale is still having these issues with their games. Honestly, it’s bullshit and I can’t ignore the technical problems just because Loader Bot says some really funny jokes. 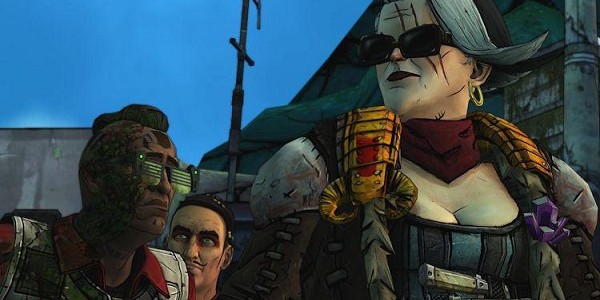 At the end of the episode things are not going well. I won’t spoil anything, but Valory seems to have the upper hand. A character is taken away and things look bad. And what you are going to have to do next, well it seems impossible. This is certainly the low point for these characters. The Empire Strikes Back moment of the story. Things are not going well, the future looks impossible and some characters are gone, maybe never to return. I don’t know how things will workout in Episode 4 of Tales From The Borderlands, but I’m excited to find out.
Tales From The Borderlands Episode 3 "Catch A Ride" is a funny and at times emotional episode. It doesn't feel too long or too short and I really enjoyed the writing and some of the action scenes. Sadly, the episode is filled with technical issues. Framerate dips, bad audio syncing, etc. But none of these are bad enough to ruin the episode. They just make it harder to love how great it is. Which is a shame.
Rating
8.7
Pros