Tales From The Borderlands Episode 4 Review

"It's Time To Do A Space Heist!"
By: Zack Zwiezen | Mobile Reviews - PC Reviews - PS3 Reviews - PS4 Reviews - Xbox 360 Reviews - Xbox One Reviews | August 23, 2015
You can read our review of Tales From The Borderlands Episode 1 here. In that review we talk about the overall gameplay and look. You can also read our review of Episode 2 and Episode 3.That review and this review focus on the story and characters. No major spoilers for Episode 4 are in this review.
Warning: Some mild spoilers for Episode 1, 2 and 3 might appear.

The latest episode of Tales From The Borderlands is my favorite thing Telltale Games has ever done. It easily the best episode of this series so far and it might just be one of the best things I end up playing this year. And unlike Episode 3 this episode, Escape Plan Bravo, starts with a bang and ends in way I didn't expect.
After the events of Episode 3 our ragtag group is basically screwed. Valory, the leader of the bandits, has them captured and is fully in control. She offers them a deal. She, along with everyone else, wants to find the final Gortys piece that will allow the funny little robot to find and open an alien Vault. So her deal is simple: Go to the Hyperion space base and steal the final piece OR die. Painfully.
So Rhys, Sasha, Fiona, LoaderBot and Gortys come up with a plan that might work and the early parts of this episode revolve around getting what you need and setting up this plan. Weirdly Vaughn, your geeky friend from the first 3 episodes is “missing” in this episode. And while there is an explanation, it feels like the voice actor was probably just too busy to record much beyond a quick voice cameo. But honestly I wasn’t too sad about his absence as I found him to be the weakest character of the group. 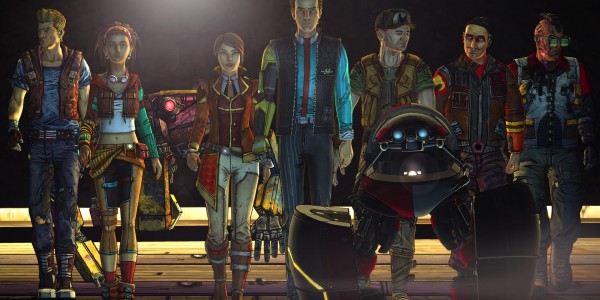 Instead Tales From The Borderlands Episode 4: Escape Plan Bravo focuses on Rhys and his ghost/hologram/AI buddy Handsome Jack, Sasha and Fiona’s relationship and how the group is getting better at working together.
The plan to get the final piece involves using a dead body of a higher up at Hyperion to create a holographic skin for Rhys to wear so that he can enter the space base and disable security so that Fiona and Sasha can enter. Once in they will steal an ID from a Handsome Jack Memorial Experience Tour Guide. The tour takes a group through a secure part of the facility and allows them to get access to Jack’s office, where the final piece is. The plan sounds complex and almost destined to fail.
And before they even land on the Hyperion base we lose someone. And this death is one of the saddest deaths I’ve dealt with in a Telltale Game. I won’t say who dies or how they die...but the whole time I was filled with sadness and I kept shaking my head.
“There is no way Gearbox would let Telltale do this..right? This is a joke? This can’t be real??” But sadly it was real and that character is dead. 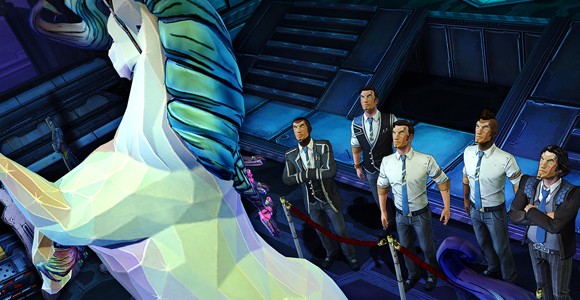 After that initial gut punch the plan continues to go off the rails. Eventually Rhys is put in a position where he must choose between power or following the plan. I don’t even know what would happen if you chose differently from what I chose. It seems crazy that Telltale would support a split of this magnitude. I guess I’ll have to find out how long they stick with it.
Like the last episode, there are not a lot of puzzles or even combat moments in episode 4 of Tales From The Borderlands.  The biggest action moment in the episode is a hilarious and strange finger gun shootout that takes place on the Hyperion station. It is a bizarre moment, but like the rest of this series I found myself laughing and enjoying every second of it.
A pleasant surprise was how well this episode ran. Usually Telltale games are filled with screen tearing, framerate dips, sounds disappearing or worse. But outside of one moment where a character’s lips desynced I ran into almost no technical issues. This lack of technical issues makes an already great episode amazing. 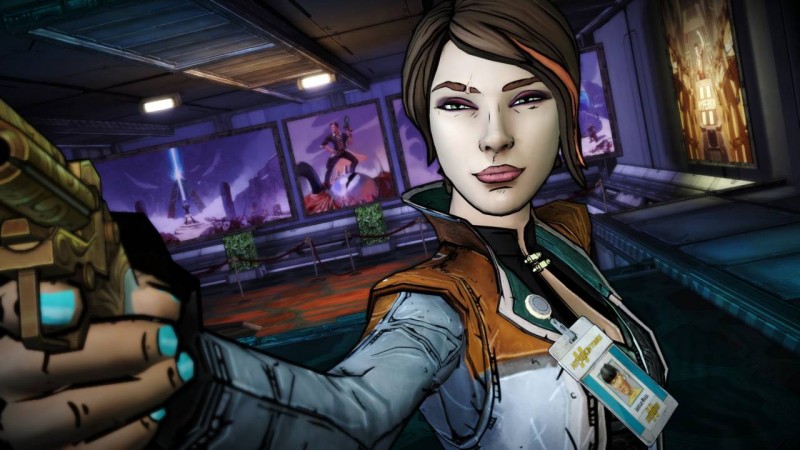 Each episode of Tales From The Borderlands continues to be amazing and since Episode 2 each one has been better than the last. This episode continues that trend. It is funny and filled with great writing and some fantastic sequences. My only real complaint is a lack of LoaderBot.
I am so excited to see how this story ends with the fifth and final episode. Will Rhys stay trustworthy? Where is Vaughn? Are Fiona and Sasha going to find their old mentor/dad who betrayed them? And will LoaderBot get any more dialogue? The guy was painfully quiet this episode. Episode 4 has got me even more excited to see how this all ends. I can’t wait for the final episode of Tales From The Borderlands.
Let’s hope I don’t have to wait 4+ months to play it.
Rating
9.5
Pros